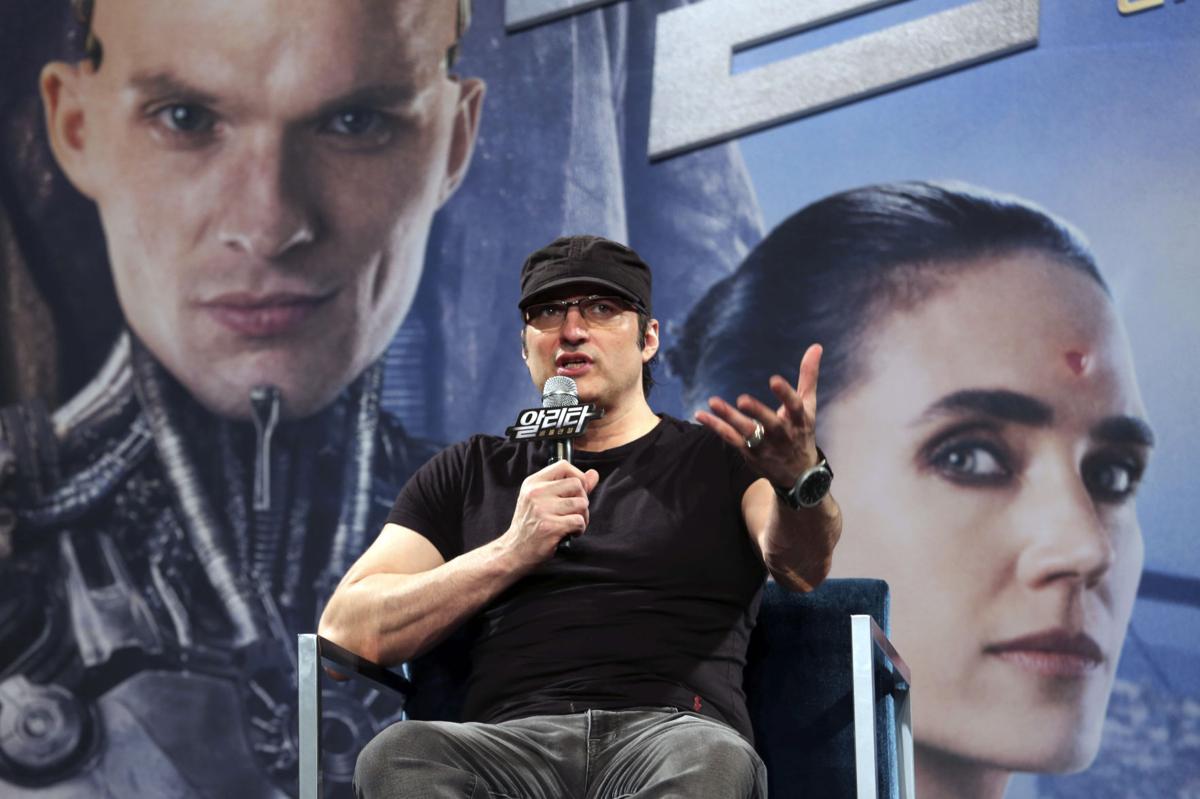 Filmmaker Robert Rodriguez speaks during a press conference to promote of his film ‘Alita: Battle Angel’ in South Korea in January. 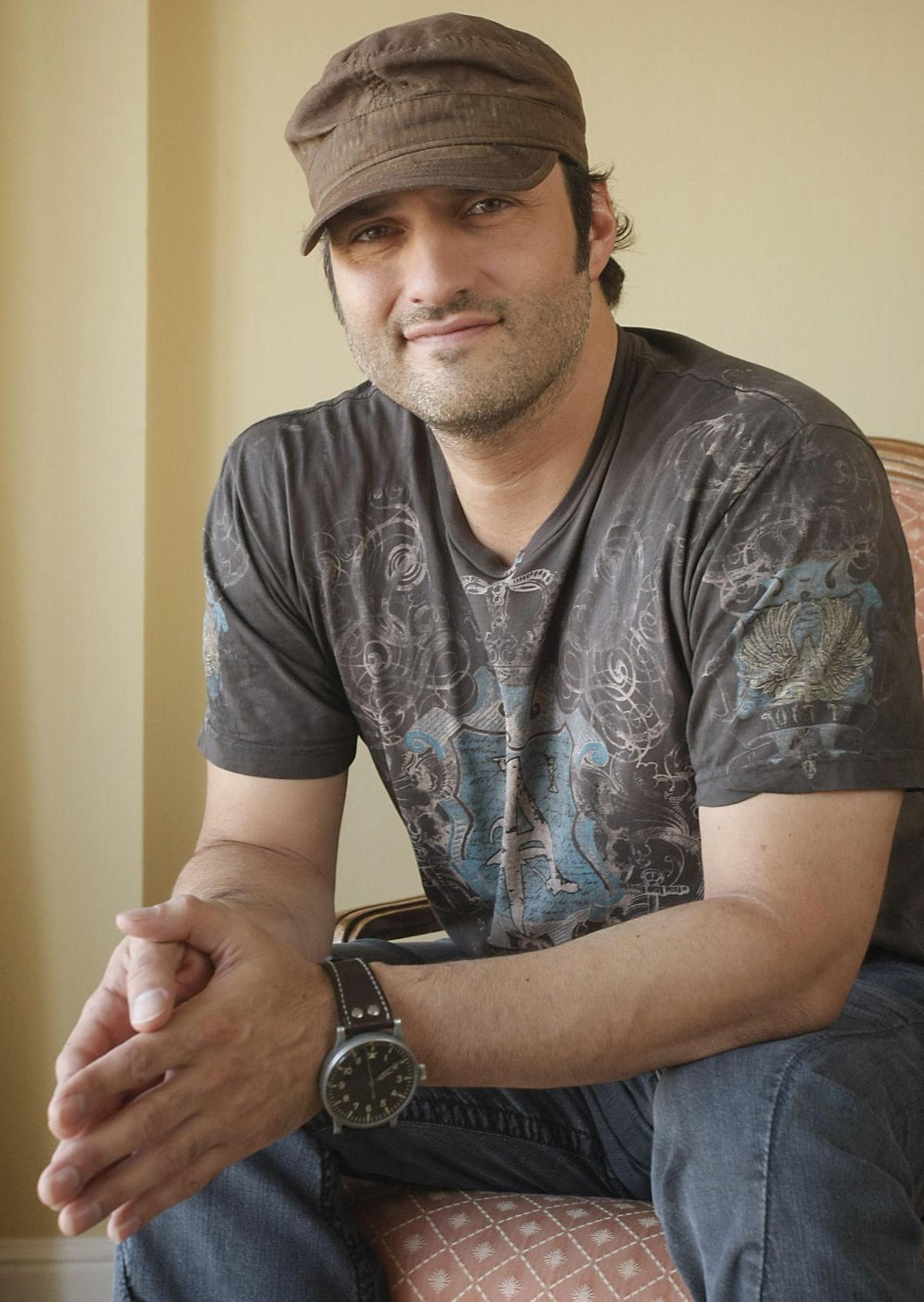 Visionary director Robert Rodriguez will bring his movie magic – and a Master Class for aspiring moviemakers – to the El Paso Film Festival set for Oct. 24-27. 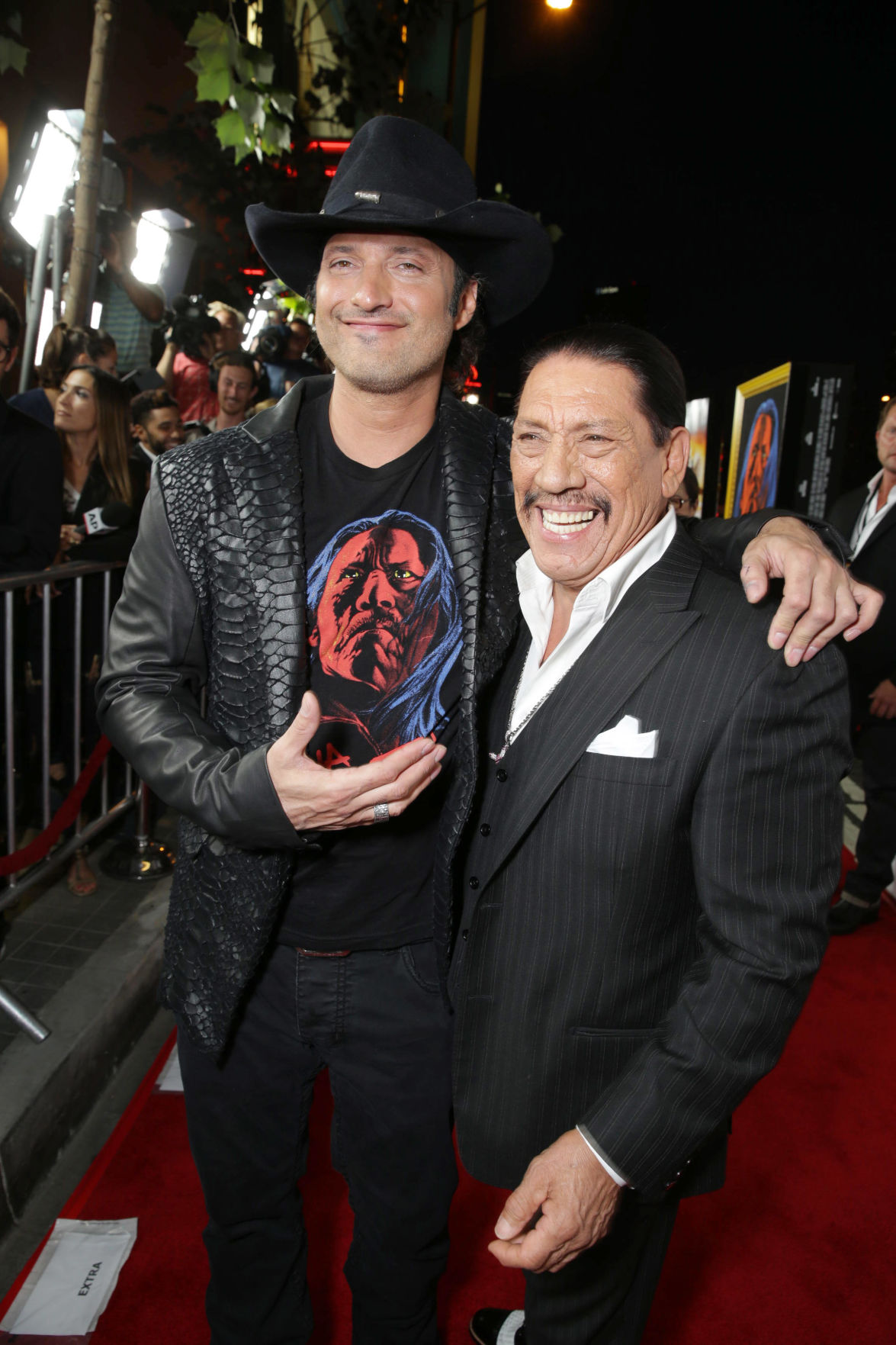 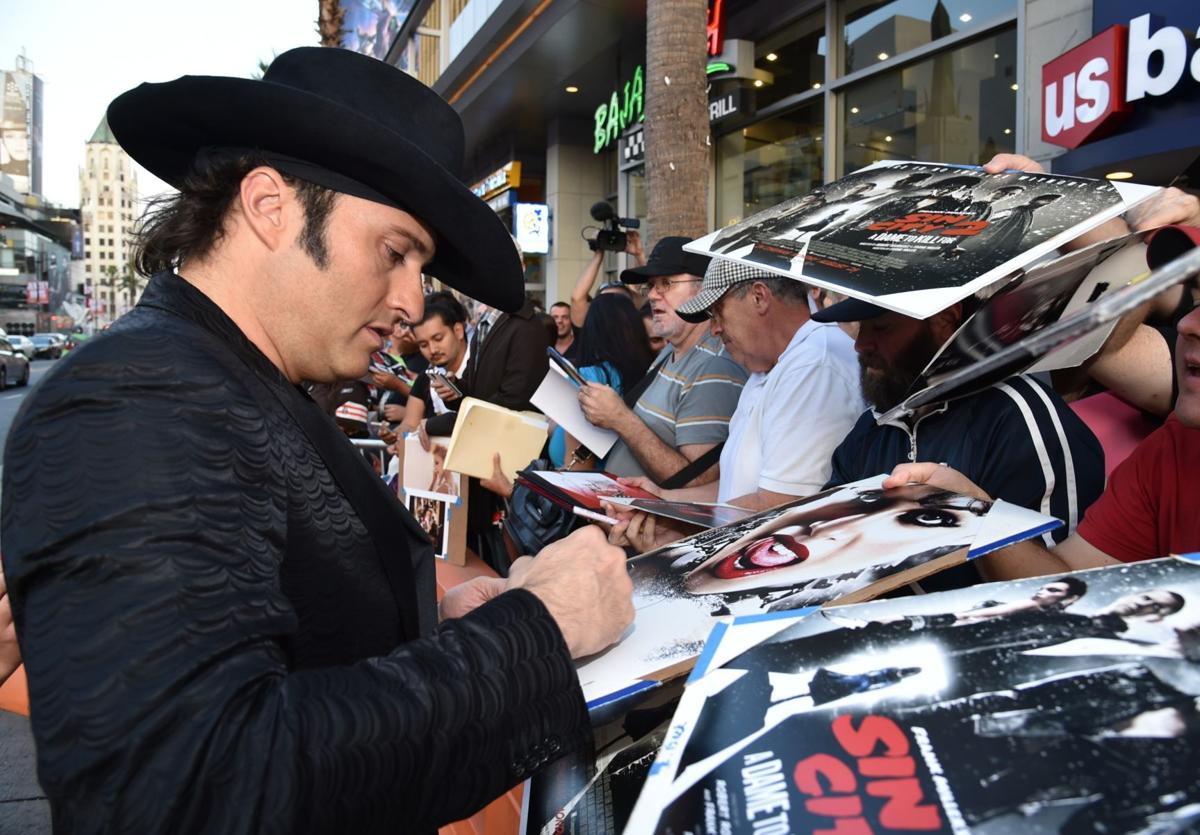 Director Robert Rodriguez arrives at the ‘Sin City: A Dame to Kill For’ premiere in Los Angeles in 2016. 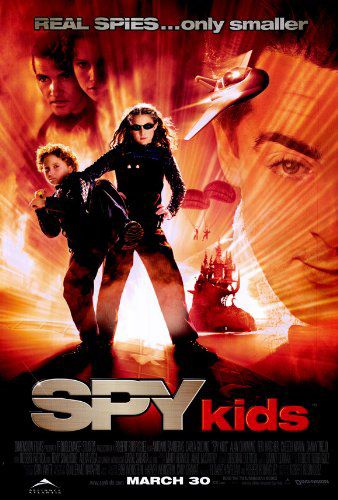 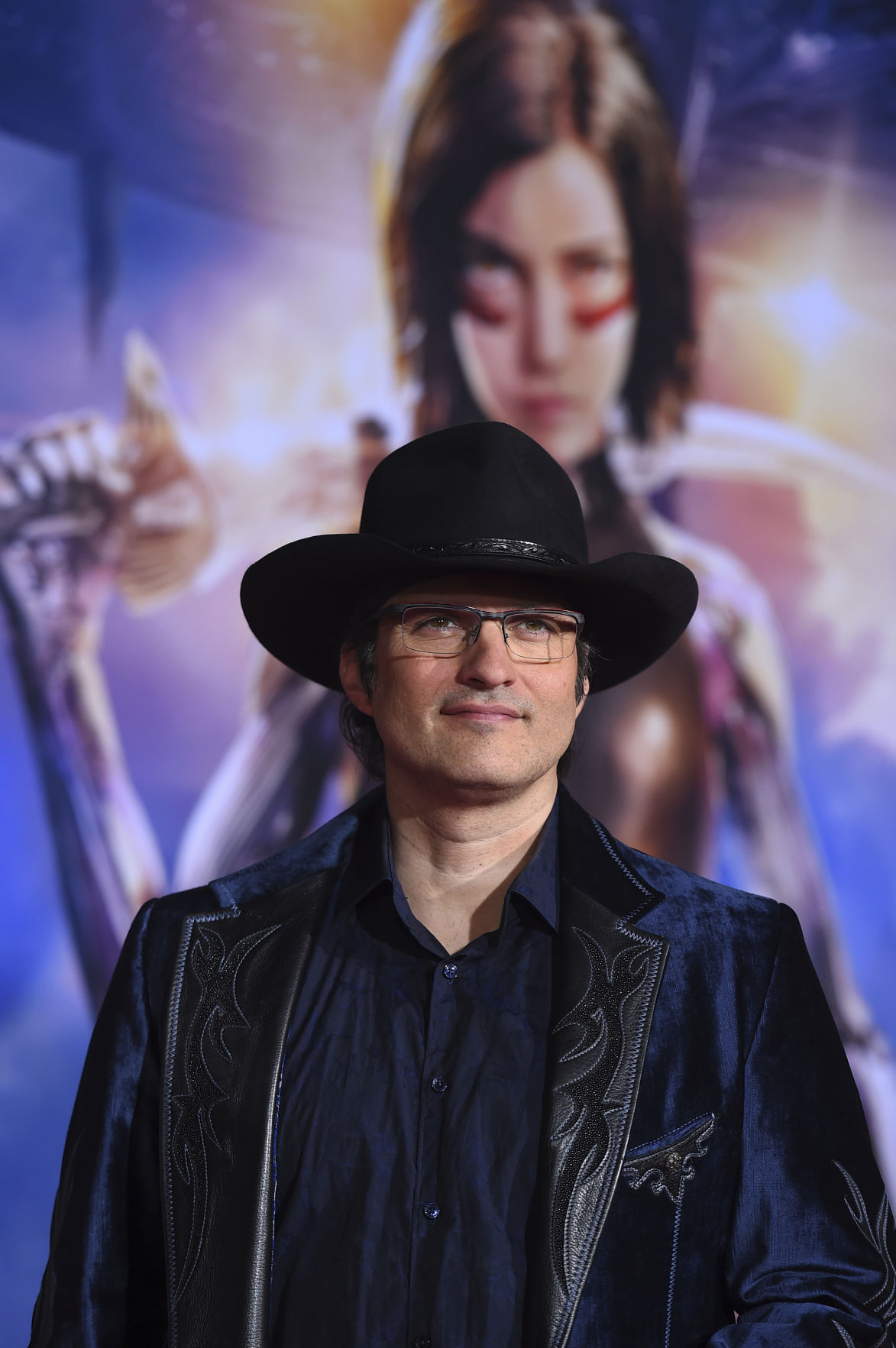 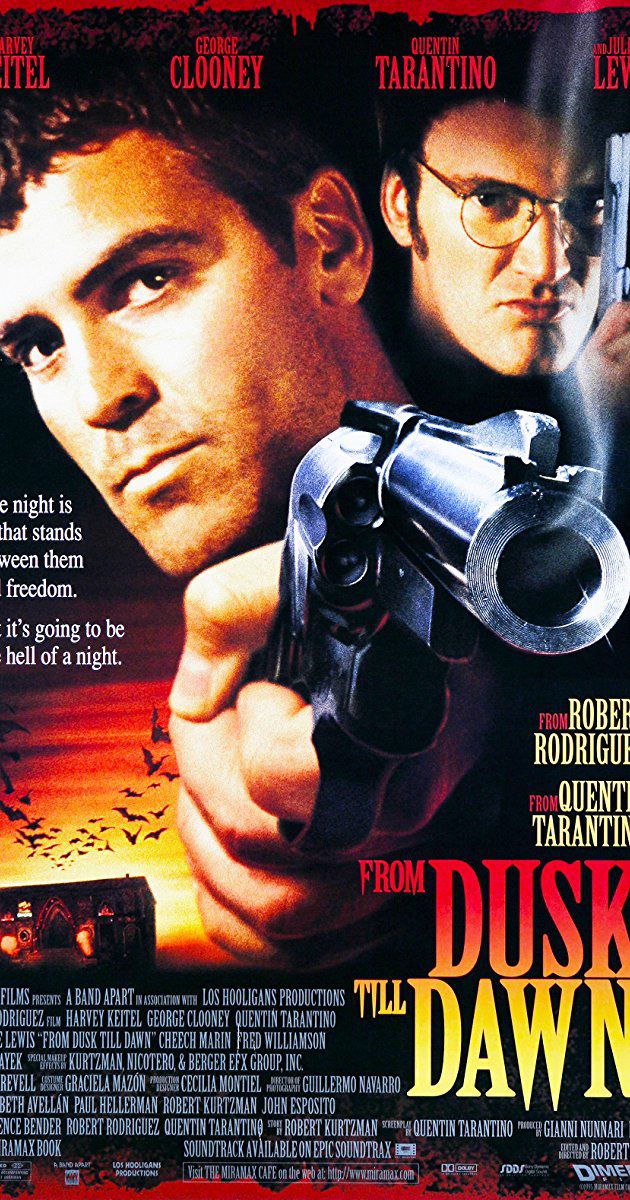 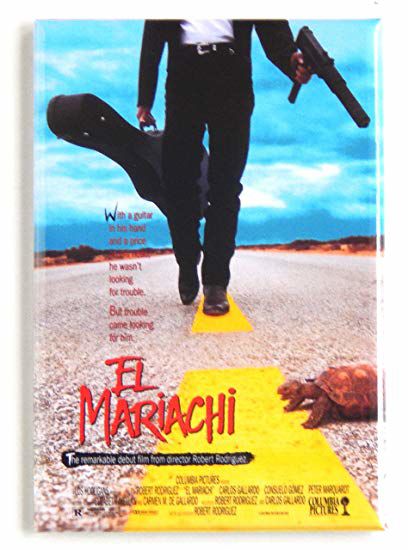 Filmmaker Robert Rodriguez speaks during a press conference to promote of his film ‘Alita: Battle Angel’ in South Korea in January.

Visionary director Robert Rodriguez will bring his movie magic – and a Master Class for aspiring moviemakers – to the El Paso Film Festival set for Oct. 24-27.

Director Robert Rodriguez arrives at the ‘Sin City: A Dame to Kill For’ premiere in Los Angeles in 2016.

The visionary filmmaker behind action hits such as “El Mariachi,” “From Dusk Till Dawn,” “Desperado,” “Spy Kids” and “Alita: Battle Angel” is bringing his movie magic to the borderland.

Robert Rodriguez, 51, will make an appearance at the second annual El Paso Film Festival on Thursday, Oct. 24 at the Plaza Theatre. The independent and local film festival, which runs Oct. 24-27 at the Plaza  and surrounding Downtown venues, will include 12 feature films and about 60 short films.

Rodriguez will lead a filmmaking Master Class alongside a screening of his latest film, the sci-fi thriller “Red 11,” which he made for less than $7,000 as an homage to his breakthrough 1992 film “El Mariachi” – both of which star Carlos Gallardo.

“El Mariachi” famously also cost only $7,000 to make – and propelled Rodriguez to Hollywood stardom. It was the first in what became known as the “Mexico Trilogy,” which also included “Desperado” and “Once Upon a Time in Mexico,” both starring Antonio Banderas and Salma Hayek.

“Red 11” – based on a medical research lab where young people sell their bodies to science at a price – is also a throwback to his days participating in experimental clinical drug testing to earn money to make “El Mariachi.”

El Paso Inc. asked Rodriguez, a native of San Antonio, a few questions ahead of his Sun City appearance:

“El Mariachi” was never meant to be shown. I was making it for the Spanish home video market as a practice film only, which is why I did every job and had no crew. I wanted to learn as much as possible by making the film and knew I’d make a lot of good mistakes by accident.

I think having that sort of attitude helped me not to get too precious with it, and it ended up being such a fun film that it won the Audience Award at Sundance.

So with “Red 11,” I wanted to show how by embarking on a similar journey, by making a film that was only to be used as a teaching tool, that accidents would again happen and inspiration and creativity would dominate in place of money and crew and you could probably end up with something special.

You can’t help but learn a lot when taking on a seemingly impossible task. Fortunately, it was documented this time and I’ll be showing some of those behind the scenes during the masterclass. It’s very inspiring.

Q: Do you find it more or less challenging and gratifying to make a blockbuster with many moving parts like “Alita,” as opposed to a small production where most aspects of production are within arms reach?

I like them both. Making something like “Alita” – you can’t see images like that unless you enlist an enormous crew of artists and technicians and push the envelope of technology. It’s incredibly gratifying, and working with (producer James] Cameron is a masterclass in and of itself.

At that same time though, and on the other end of the spectrum, I was making “Red 11” with only my son as a crew. (Both films premiered within a month of each other). That is incredibly gratifying to know you can just pick up a camera and make a movie with virtually no money and create entertainment that people can screen and enjoy. It’s totally empowering, hugely satisfying, and brought my whole family really close together. It’s hard to beat that.

Q: You’re already considered part of the firmament of great independent filmmakers like John Cassavetes and Steven Soderbergh. How do you wrangle the legacy you’ve created for yourself?

I started very young, so it is a strange feeling to look back and see that I’ve been doing this professionally for almost 30 years! It’s really cool to be around so long that you start seeing things come full circle.

I wanted to make “Red 11” originally to celebrate the 25th anniversary of “El Mariachi,” and the experience ended up changing my life and my life’s goals. I had so much fun working with my kids on it that it sparked all kinds of new projects where they work alongside me. It teaches them how to manifest and create anything in their own lives, even if they don’t become filmmakers.

The life lessons they learn are invaluable. You don’t feel like you’re working at all when doing that alongside your kids, they inspire you right back again with their own ideas and breakthroughs. And it’s family time!

Q: Do you have any projects lined up after “Red 11” and the related docu-series?

My kids and I got so amped up working on “Red 11” that we collaborated on a big family action film for Netflix, like in the “Spy Kids” vein, only with little kid superheroes.

It’ll come out next year. It was the best film shoot experience I’ve ever had, with all of them working on the film in some capacity. Can’t wait for people to see that one, it’s really fun and really special.

Q: If you were stranded on a desert island and could only take five films to watch, which would you take?

“Godfather,” “Jaws,” Hitchcock’s “Notorious,” “Escape From New York,” “The Terminator.” There’s probably more, but those were the first to pop in my head.