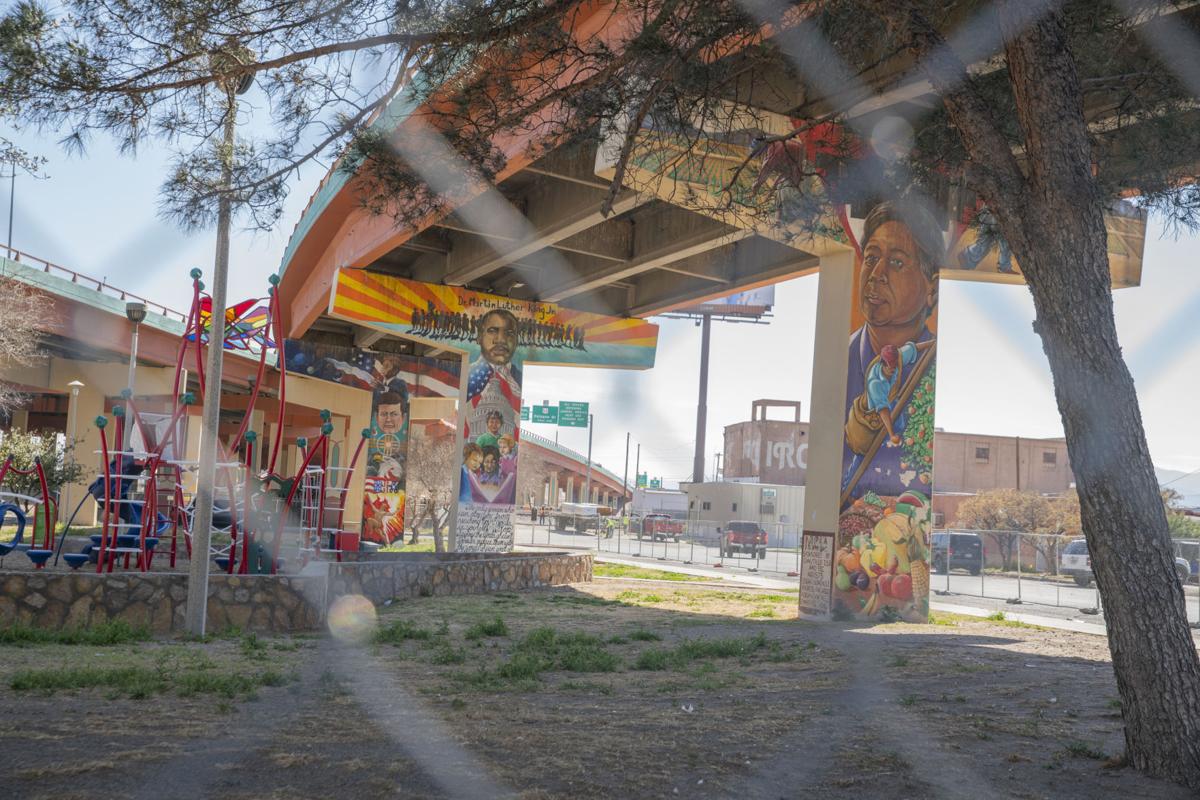 From the right: These columns with murals of César Chávez, Martin Luther King Jr. and John F. Kennedy will be demolished as part of a major state transportation project. ‘La Virgen de Guadalupe’ mural by Felipe Adame, shown above and boarded up on the cover photo, won’t be demolished. Matachines perform at Lincoln Park in front of the ‘Mariachi Sol’ and ‘Mariachi Luna’ murals by Steve Salazar, two of 15 that are set to be demolished as part of the Texas Department of Transportation’s I-10 Connect Project. The column featuring the mural ‘Nuestra Reina de El Paso, Ombligo de Aztlan’ by Carlos Callejo and EPISD students will be torn down. From the right: These columns with murals of César Chávez, Martin Luther King Jr. and John F. Kennedy will be demolished as part of a major state transportation project.

‘La Virgen de Guadalupe’ mural by Felipe Adame, shown above and boarded up on the cover photo, won’t be demolished.

Matachines perform at Lincoln Park in front of the ‘Mariachi Sol’ and ‘Mariachi Luna’ murals by Steve Salazar, two of 15 that are set to be demolished as part of the Texas Department of Transportation’s I-10 Connect Project.

The column featuring the mural ‘Nuestra Reina de El Paso, Ombligo de Aztlan’ by Carlos Callejo and EPISD students will be torn down.

They stand proud beneath the rumble of thousands of cars, trucks and diesel engines that carry people and commerce across the borderland and into Juárez.

Some display the outstretched arms of angels touching unfurled flags of the United States and Mexico; others dance in brilliant colors beneath painted suns, moons and stars; and many carry images of presidents and revolutionaries bound in tribute to the plight of the oppressed.

They’re the Stonehenge of Chicano history in the region: vibrant murals emblazoned on the massive 30-foot concrete columns that support the soaring freeway overpasses known as the “Spaghetti Bowl,” crisscrossing the airspace of Lincoln Park in Central El Paso.

The park now has 51 such colorful murals – the first, a Felipe Adame painting of the Virgen de Guadalupe, has been up nearly four decades.

Now, 15 of those pillars and their murals – already closed off to the public behind chain-linked fences – are slated to be demolished this fall as part of a state freeway project to expand those overpasses.

The Texas Department of Transportation’s $96 million I-10 Connect Project, which started March 3, will reconfigure the freeway from the intersection of U.S. Highway 54 and Interstate 10.

It will build four new roadway ramps to improve access between I-10 and Loop 375. It is designed to facilitate the flow of traffic to the Bridge of the Americas port of entry and alleviate traffic in nearby neighborhoods.

The project is expected to take about three years to complete.

The transportation project has left members of the Lincoln Park Conservation Committee, which has spearheaded efforts to oppose unwanted alterations to the park, lamenting murals’ inevitable demise.

They worked with TxDOT to preserve as many as possible.

The mural of the coveted Virgen, the maternal spirit of Catholicism deeply embraced by Hispanics, will be spared from the wrecking ball.

Several murals were slated to be removed, but will instead remain as freestanding structures, including the “Pillar of Hope 9-11 Tribute,” “The Struggle” and “Daylight,” all by Cesar Inostroza.

But the two rows of murals on the park’s easternmost side will be lost: Día de los Muertos (Day of the Dead) and Memorial Row, which features Civil Rights leaders who died in their activism.

“All these icons on the murals that are coming down, fought for the people, for our rights, for our civil rights,” said Gabriel Gaytan, one of El Paso’s recognized artists whose murals color the park.

“Now it’s their murals that are sacrificing themselves for the betterment and protection of this community, of the center, and the park,” he added.

Lincoln Park has been ground zero in the battle between activists intent on protecting any encroachment to the land they believe should be protected for its cultural value, and TxDOT, which is laboring to provide an effective, environmentally safe, cost-effective solution to the region’s growing traffic challenges.

“We didn’t want to lose any murals, we wanted to save all of them,” said Hector Gonzales, president of the Lincoln Park Conservation Committee.

“We fought all the way to the very end, but the final decision was made to remove them, and I think we had reached the point where we had to compromise,” he said.

Officials with the state agency said they had several alternatives, but settled on the one that made the most sense.

“We considered at least 20 versions of possible alternatives for the I-10 Connect Project, and we weighed them on criteria that included constructability, feasibility, cost and the environmental process that would include displacing people, which is always a last resort,” said Jennifer Wright, a TxDOT El Paso spokeswoman.

She said no homes would be impacted by the project.

TxDOT said the focus now is on completing the project, and protecting murals that both sides agreed would be untouched.

Bielek said once the project is complete, new columns will be made available for new murals.

The western half of Lincoln Park is also closed and fenced off, but will be preserved, state transportation officials said.

That includes the Lincoln Center, its amphitheater, a portion of the parking lot, the playground, tennis courts and two handball courts on the park’s west side.

Carlos Callejo, the artist who in 1999 coordinated the subject matter of most of the murals to be removed, said he felt their removal was a blow to the cultural identity of the region.

“It’s devastating, to tell you the truth,” said Callejo, who is now a full-time artist in Los Angeles.

“What hurts is that these murals are not mine. I just sort of was a catalyst to that process.”

Callejo worked with about 70 students from around El Paso to research and paint them.

“So when these murals are destroyed,” he said, “I feel it more not for me but for the community itself.”

As news filtered out to the community about the murals coming down, park visitors photographed them to remember the stories that the images on the columns inspire.

“I want to have memories of these,” said Melanie Shearer, who recently visited the murals with her wife, Laura Shearer, as she recalled dancing for Rosa Guerrero in the community center for years.

The longtime director of the International Ballet Folklorico and cultural ambassador throughout the United States, Guerrero herself remembered her years teaching dance at the Lincoln Center.

She said she was disappointed the murals are coming down because they represent so much about the community’s culture, heritage and history.

“Sacrifice is sacrifice,” she said. “You give your life for your country, your culture, your language, so the coming down of these murals is very sad.”

The following Lincoln Park murals will be demolished:

‘Music Under the Stars’