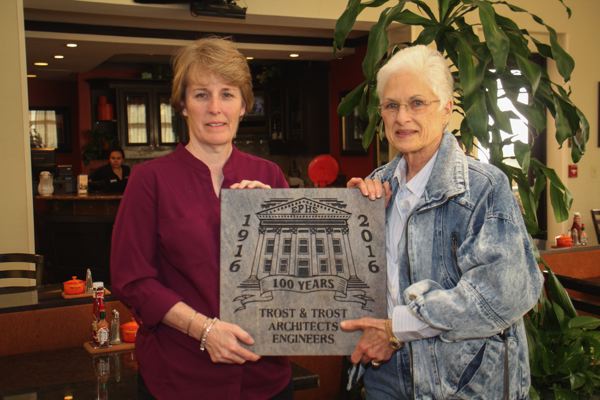 Margaret Smith, left, is the great niece of Henry C. Trost, the architect who designed El Paso High School. She holds a commemorative tile for his company, Trost & Trost, to be placed at the school. With her is Sandy Aaronson, who heads up the school’s Tile Project, part of its centennial celebration. 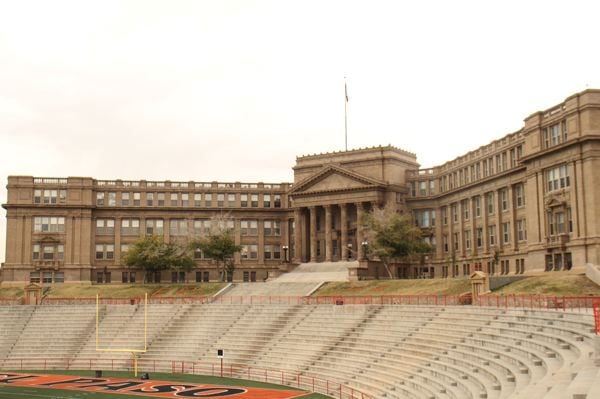 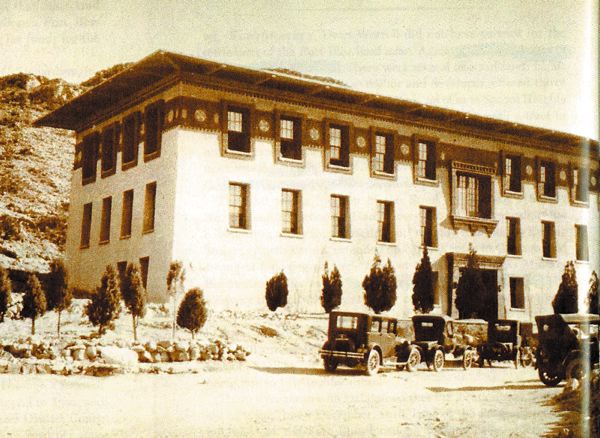 Trost was also involved in several of UTEP’s first buildings on its Westside campus, including Old Main. UTEP celebrates its centennial this year. 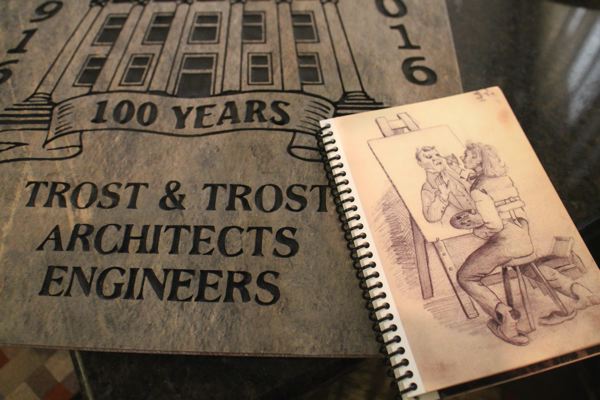 Margaret Smith, left, is the great niece of Henry C. Trost, the architect who designed El Paso High School. She holds a commemorative tile for his company, Trost & Trost, to be placed at the school. With her is Sandy Aaronson, who heads up the school’s Tile Project, part of its centennial celebration.

Trost was also involved in several of UTEP’s first buildings on its Westside campus, including Old Main. UTEP celebrates its centennial this year.

Architect Henry Trost touched more than one institution in El Paso. And, as it turns out, he will be celebrated at more than one 100th anniversary.

The University of Texas at El Paso, celebrating its 100th this year, and El Paso High School, which turns 100 in 2016, both offer examples of the work of Trost and Trost.

“Henry designed El Paso High School, which was built between 1913 and 1916,” said alumna Sandy Aaronson, who is responsible for the school’s Tile Project, part of its centennial celebration.

Large tiles engraved with a front view of Trost’s classically designed school and the names of students and alums are already on sale in anticipation of 2016.

Margaret Smith, great niece of Henry Trost and granddaughter of Henry’s brother Gustavus, was in El Paso recently to see the tile she bought bearing the Trost name. She is also collaborating with UTEP Library’s Special Collections on an upcoming Trost exhibit.

Smith began researching the family four years ago when she was asked to accept an award in Phoenix for Henry’s design of the Luhrs Tower.

“Aunt Matilda, Henry’s sister, gave me a big trunk filled with lots of family memorabilia. I began scanning it and put it on ancestry.com,” she said.

In April 2013, she launched the website henrytrost.org. It contains a complete list of buildings done by the firm. Over the last few years Smith has traveled, making speeches and searching for Trost buildings to update the website.

“My goal is to promote the history of the firm. I also want to provide and receive any information from people who own Trost buildings to update the website.”

“My grandfather Gustavus, his twin Adolphus, and my great uncle Henry grew up in a large family in Toledo, Ohio,” Smith said. She named the five boys and three girls, adding that Henry, the eldest, never married.

In 1903, Henry and his nephew George left Tucson and joined Gustavus in El Paso. They opened the firm of Trost and Trost and had an office in the Mills Building, which Henry designed for Anson Mills. Later they moved to the El Paso International Building.

“Adolphus was widely known as a math whiz,” Smith said. “At that time it was a plus to have a structural engineer as part of the firm. They usually operated independently or together with contractors.”

Sister Matilda ran the house at 1015 Yandell, which Henry also designed and which was completed that year.

In time Trost and Trost opened offices in Phoenix and Albuquerque and built fire stations, schools, banks, hotels, community buildings, residences, hospitals and fraternities buildings in Texas, New Mexico and Arizona – more than 600 buildings in all.

“Henry was an architect who could easily design in many styles, and a pioneer in the use of reinforced concrete. The Mills Building, built in 1910-11, is the second concrete-frame skyscraper in the U.S.,” Smith said.

And all that building helped the firm – and the city – grow.

“People visiting El Paso would see a Trost home or commercial building and decide to hire the firm to build their building or home. Henry was highly respected in the Southwest.”

Sadly, some of the 24 Trost buildings in Downtown El Paso are no longer standing.

“The Union Bank Building and Muir Building were demolished, despite UTEP art history professor Max Grossman’s efforts, and my assistance, to save them,” Smith said.

Among Trost’s remaining buildings in El Paso are Bassett Tower, the Caples Building, Hotel Paso del Norte – now the Camino Real Hotel – Wigwam Theater, the Americana Building, the Cortez and the El Paso International Building, in addition to the Mills Building. Bassett Tower even has a sculpture of a gargoyle over the entrance that’s believed to be Henry’s face.

“These are not only buildings but also places where historical events occurred or family memories were made,” Smith said.

“Gus met his wife Margaret Byrne at the Popular when he was delivering some sketches there. Adolphus met his wife, Carolyn Lea Hayes, at the White House Department Store in the Mills Building. Carolyn was a cousin of El Paso Mayor Tom Lea,” she said.

Smith described Friday night dinners where all the family members gathered together at the Yandell house.

“After supper the men would read – books or the Toledo newspaper – and the young girls would play jacks. On clear evenings they took the family telescope to the front porch to look at the stars.”

Trost’s presence on the UTEP campus goes back to the university’s earliest days.

“Many materials have been donated by Lloyd Engelbrecht, who, together with his wife June-Marie Fink, published ‘Henry C. Trost: Architect of the Southwest’ in 1981,” Rivers said.

“Margaret brought us a collection of family photos along with a sketch book Henry carried with him when he was only 17 years old,” Rivers added.

The book contains drawings of landscapes, people and an early bell tower.

Open to the public