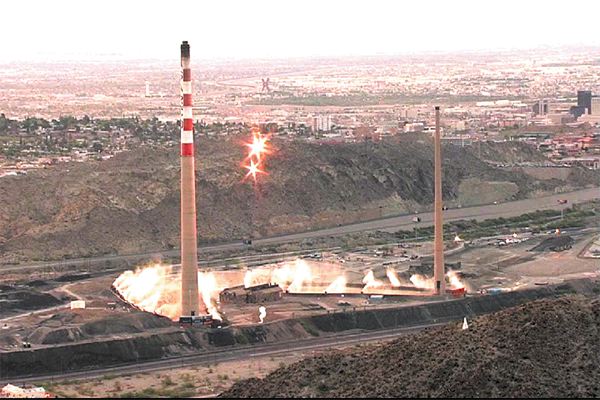 Fireworks are shot off as a warning signal just moments before the two Asarco smokestacks are demolished, April 13, 2013. 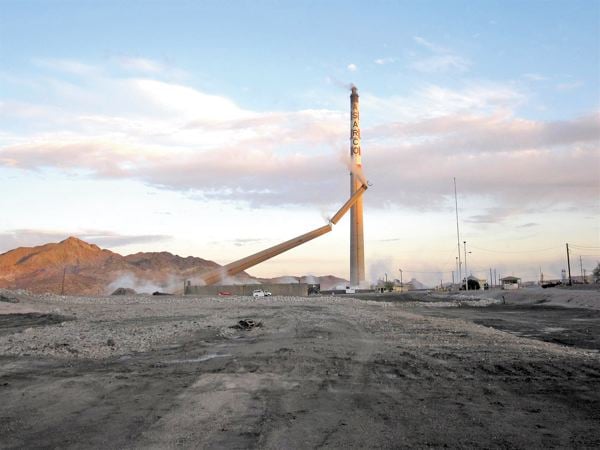 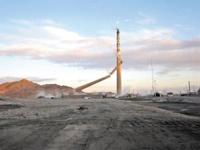 A view of the 610-foot smokestack as it falls and breaks in two on the morning of April 13. Charges have already gone off at the base of the big stack.

Fireworks are shot off as a warning signal just moments before the two Asarco smokestacks are demolished, April 13, 2013.

A view of the 610-foot smokestack as it falls and breaks in two on the morning of April 13. Charges have already gone off at the base of the big stack.

Not all history is ancient. Some of it happened just a couple of months ago. But having lived through a historic event doesn’t mean you know what really went on behind the scenes.

That’s the story told in a new documentary, “Last Tour of the El Paso Smelter, Volume 1 The Stacks,” that premieres this week with screenings at the Scottish Rite Theater in Downtown.

The program takes viewers inside the April 13 demolition of smokestacks on the site of the old Asarco smelter in West El Paso. It also goes inside a place few have seen – the interior of the 828-foot stack.

And if you’d ever wondered what the view was like from the top of the tall stack, you’ll get to see that, too, as a work crew records their climb all the way up.

“Last Tour of the El Paso Smelter” is the newest documentary from El Pasoan Jackson Polk and Capstone Productions Inc.

Over the last three years, Polk and a crew of camera operators have spent countless hours at the smelter, touring the 100-acre site and recording it for posterity. By order of a bankruptcy court, the smelter was dismantled, piece by piece, and it assets sold off to help with cleanup and remediation.

“The smelter was an American industrial giant that helped shape this region’s economy for more than 100 years,” said Polk, who has produced more than a dozen documentaries about El Paso’s history and heritage.

“Whether you thought the stacks should stay or go, our goal was to document their history and their demolition, and to give people a view of these iconic landmarks that will never be seen again,” he said.

Capstone Productions was given exclusive access to the old smelter site, and its cameras were there as explosives experts prepared to demolish the stacks. On the big day, April 13, there are more than a dozen cameras trained on the stacks, including the only ones allowed inside the drop zone.

The Capstone crew knew that one of them, nicknamed “crash cam,” was so close that it might not survive the blast. You’ll have to watch the documentary to see if it did.

Polk worked closely with engineers and news executives at KVIA Channel 7 to set up the cameras and live feeds that were available online and used by the station to enhance its coverage.

In the documentary, those camera views are used to breakdown the 30 seconds it takes to demolish the stacks. You see explosives rip through the base of the smaller stack and watch as something strange happens when the big stack starts to fall.

Then in half a minute, they are gone, and a view of El Paso that was dominated by the stacks for half a century is changed forever.

Viewers also see a major remediation project that is cleaning up one of the natural arroyos that runs through the old smelter site.

DVDs of “Volume I The Stacks” will be available later this month. Orders can be placed at the screenings or online at www.ephistory.com.

This is the first of two documentaries Polk plans to produce about the old smelter site.

And for those who can’t get enough of the video’s high-altitude access, check out the DVD’s bonus materials.

One clip shows three spectacular minutes of a man hanging from the top of the tall stack. Dramamine is optional.

‘Last Tour of the El Paso Smelter Volume I The Stacks’

Tickets at the door

$7 adults, $6 military and students with ID

• Portion of the proceeds helps support the Scottish Rite Children’s Hospital and a Smeltertown museum.

• After each screening, audience members are invited to take part in a panel discussion about forming the El Paso Smeltertown Museum.