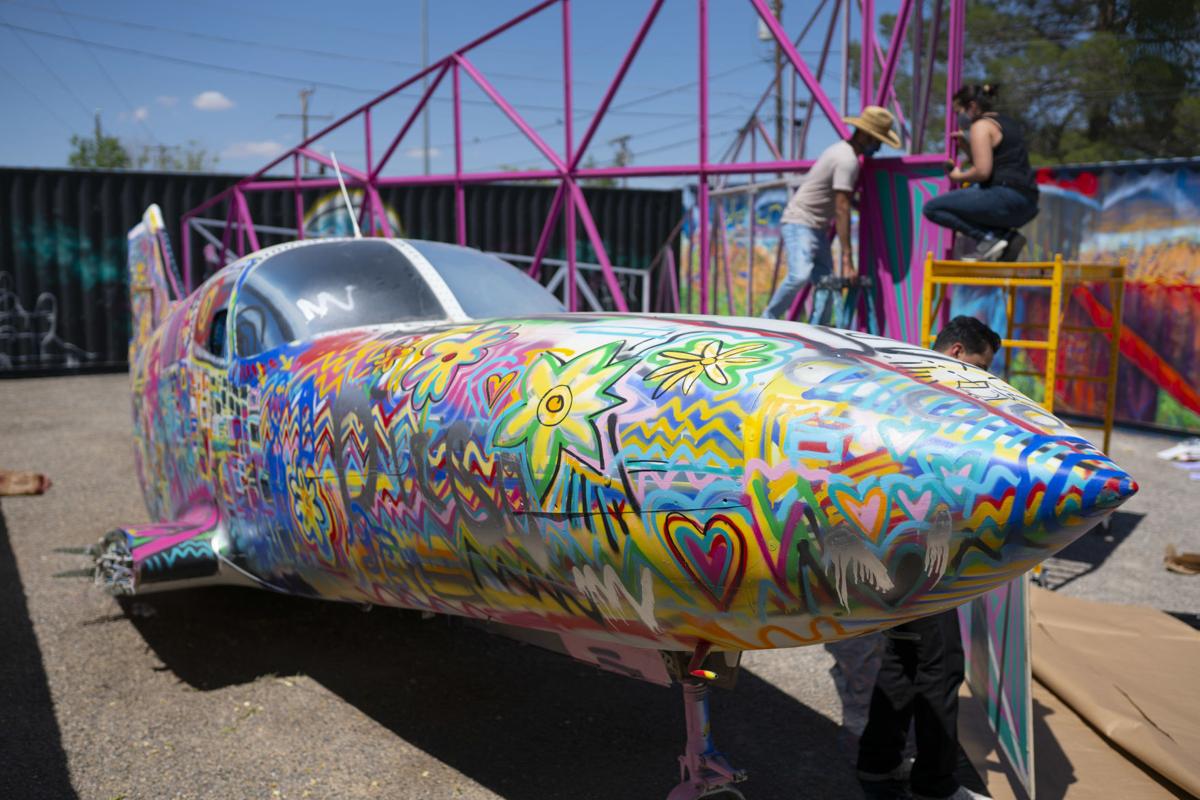 ‘Launch of Something New’ is a piece by borderland artist Diego ‘Robot’ Martinez, who is among the collaborators at the new Galería Lincoln in South Central El Paso. 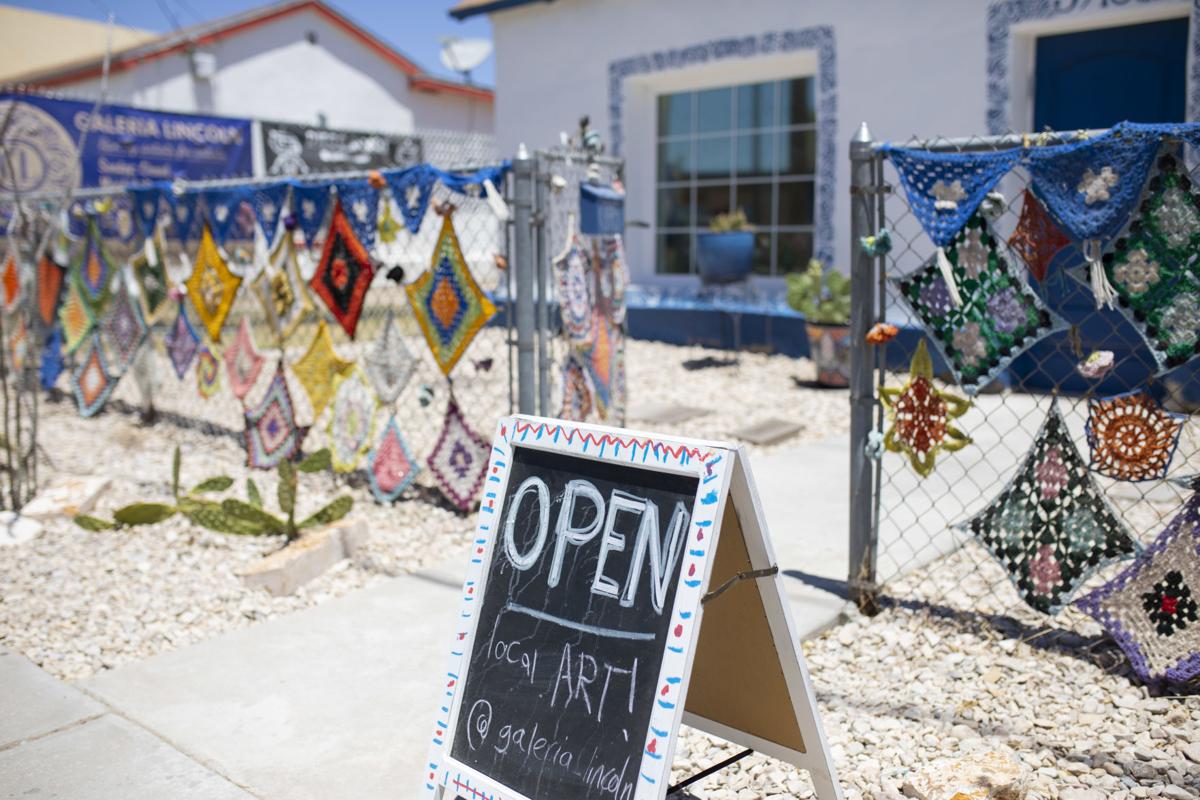 Crochet art by The Working Bees of San Elizario. 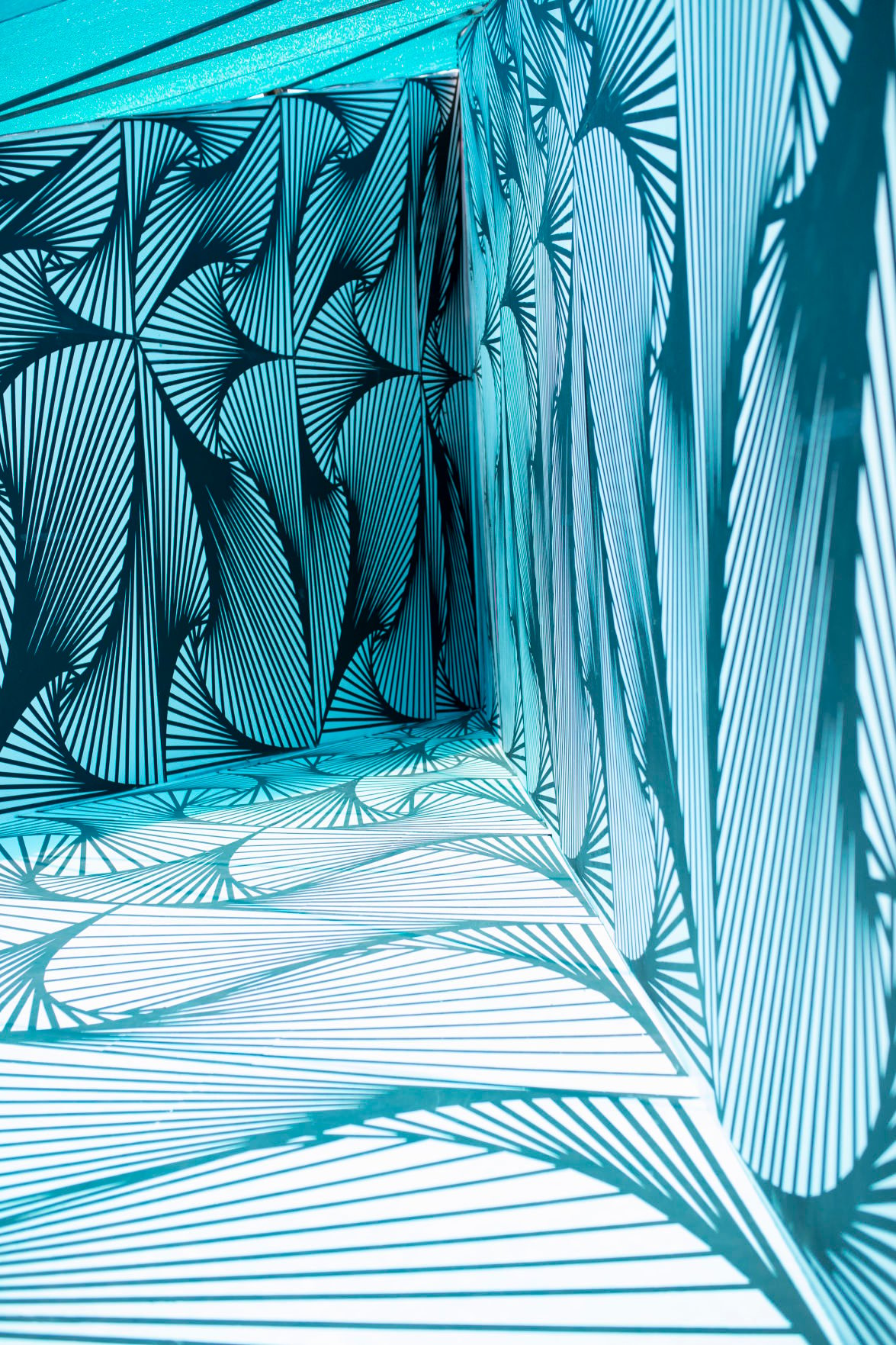 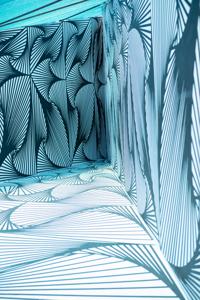 A portion of ‘Paradox Pyramid,’ an immersive art installation and optical illusion by Laura Turon. 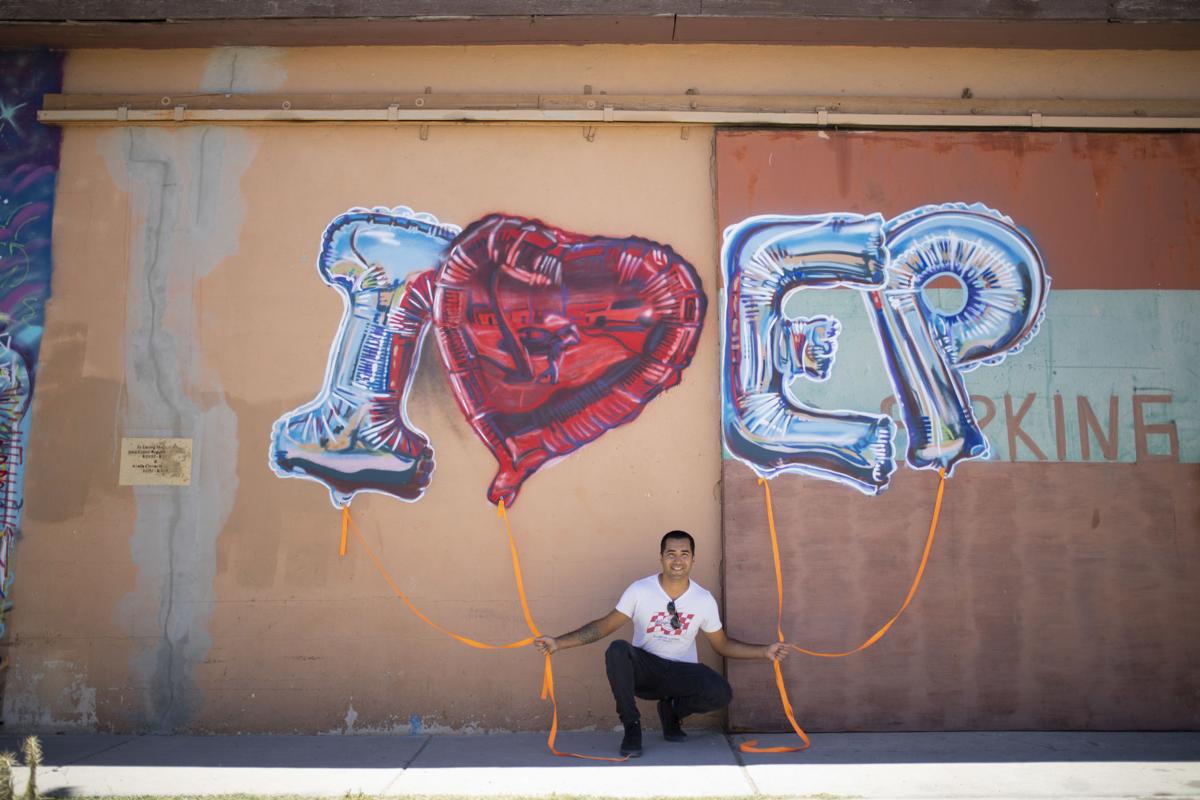 Tino Ortega poses with his mural, ‘No Parking,’ which has quickly become a popular Instagram spot. 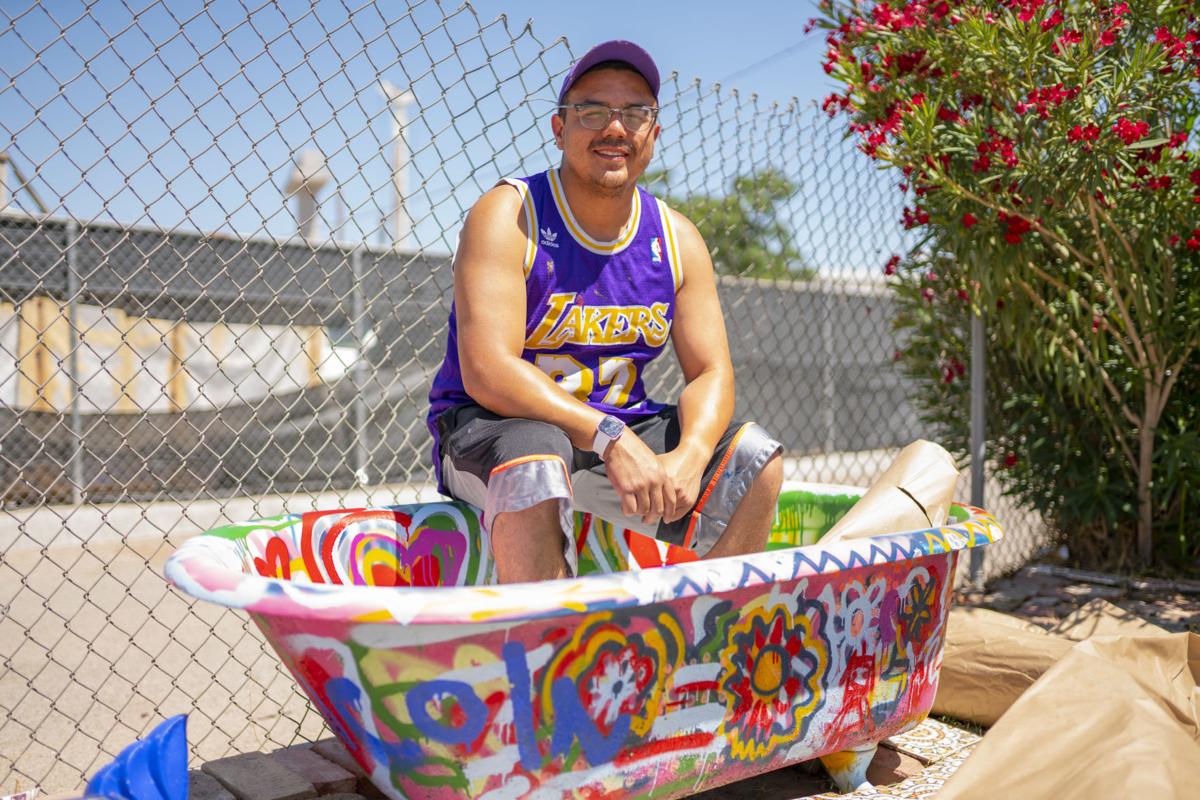 Diego ‘Robot’ Martinez sits in a clawfoot tub he painted at the gallery. 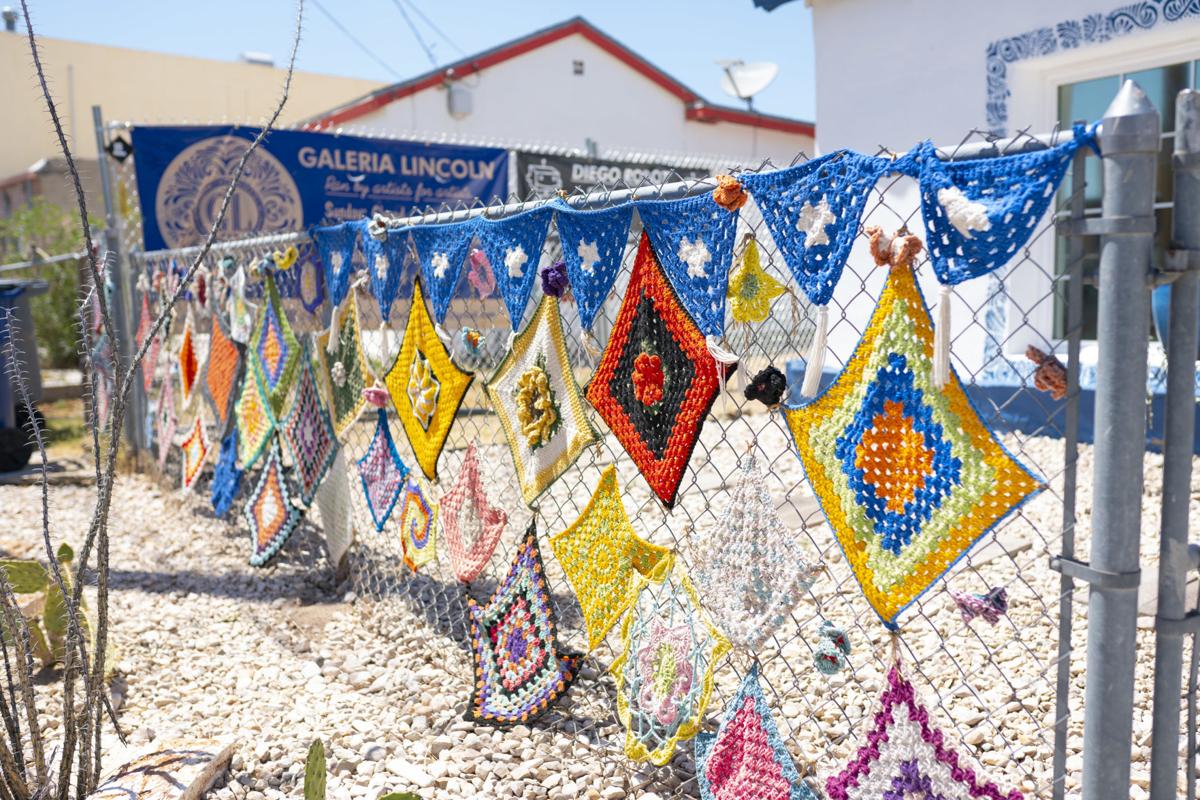 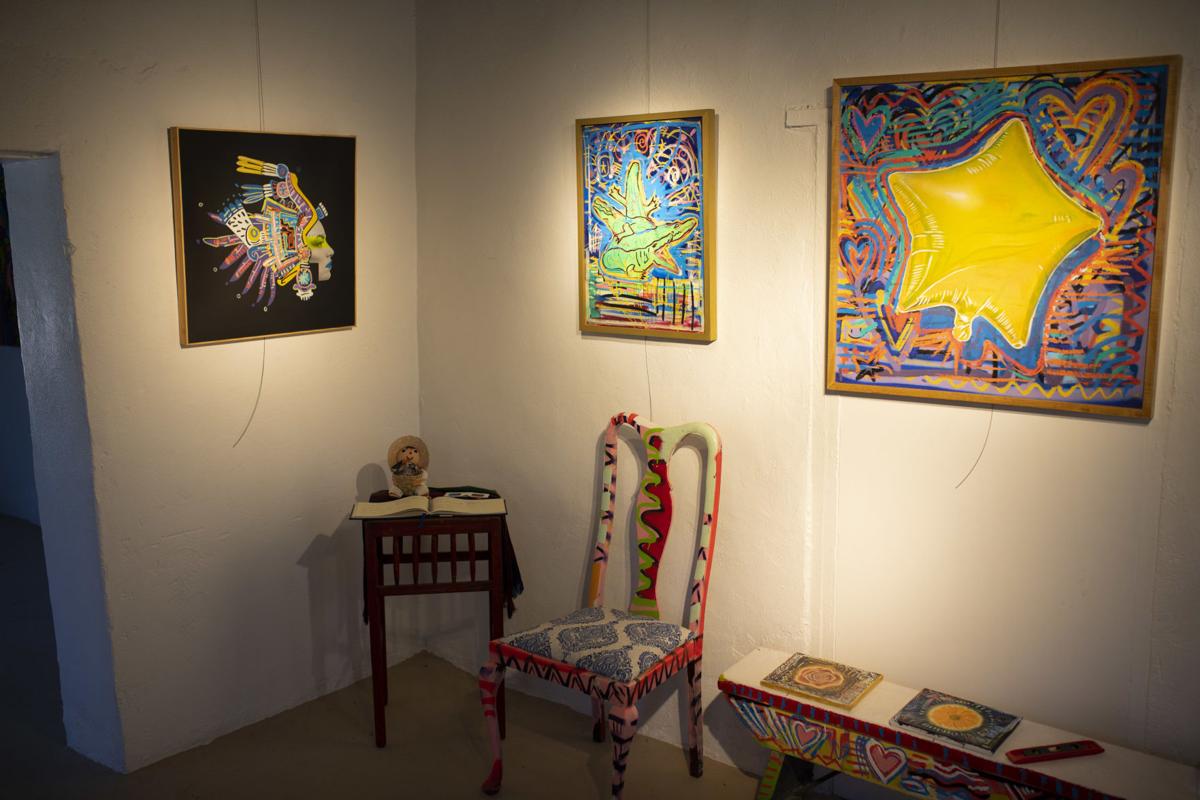 Work by various artists is available for sale at Galería Lincoln. 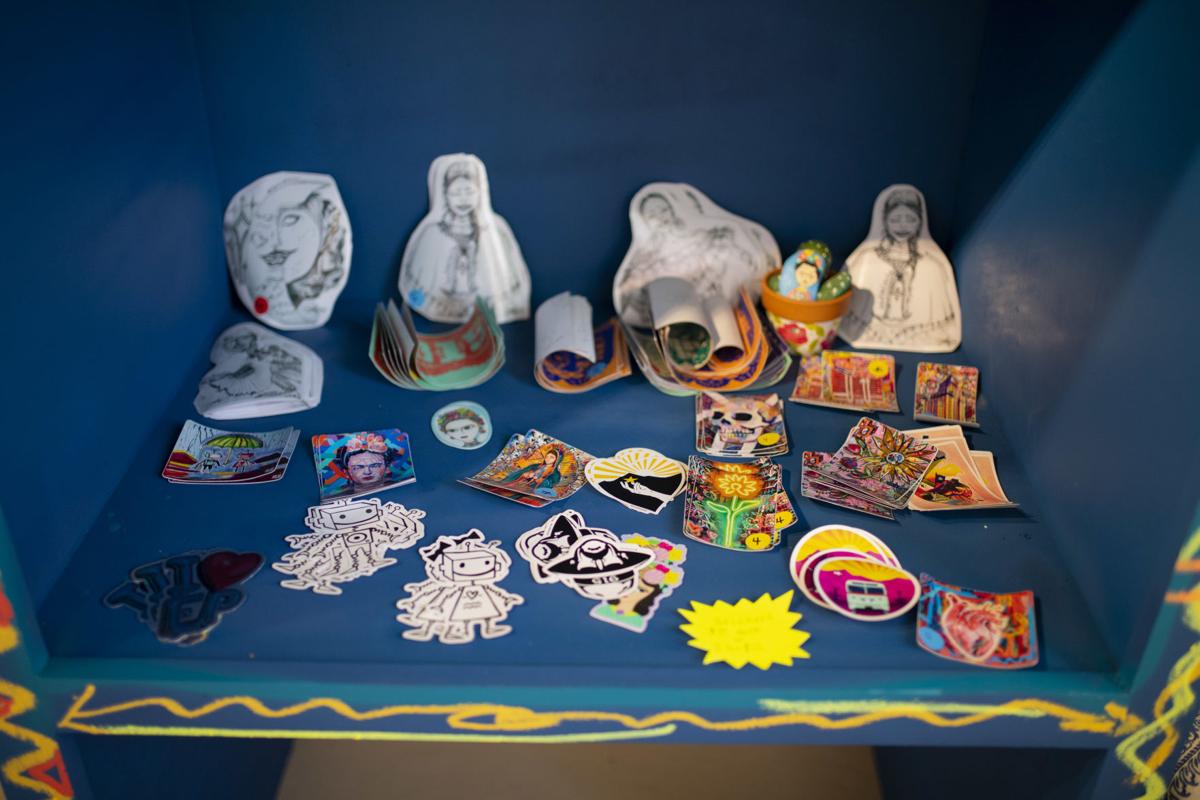 Stickers of various themes, including the El Paso Streetcar and the Virgen de Guadalupe, are among the artwork at the gallery. 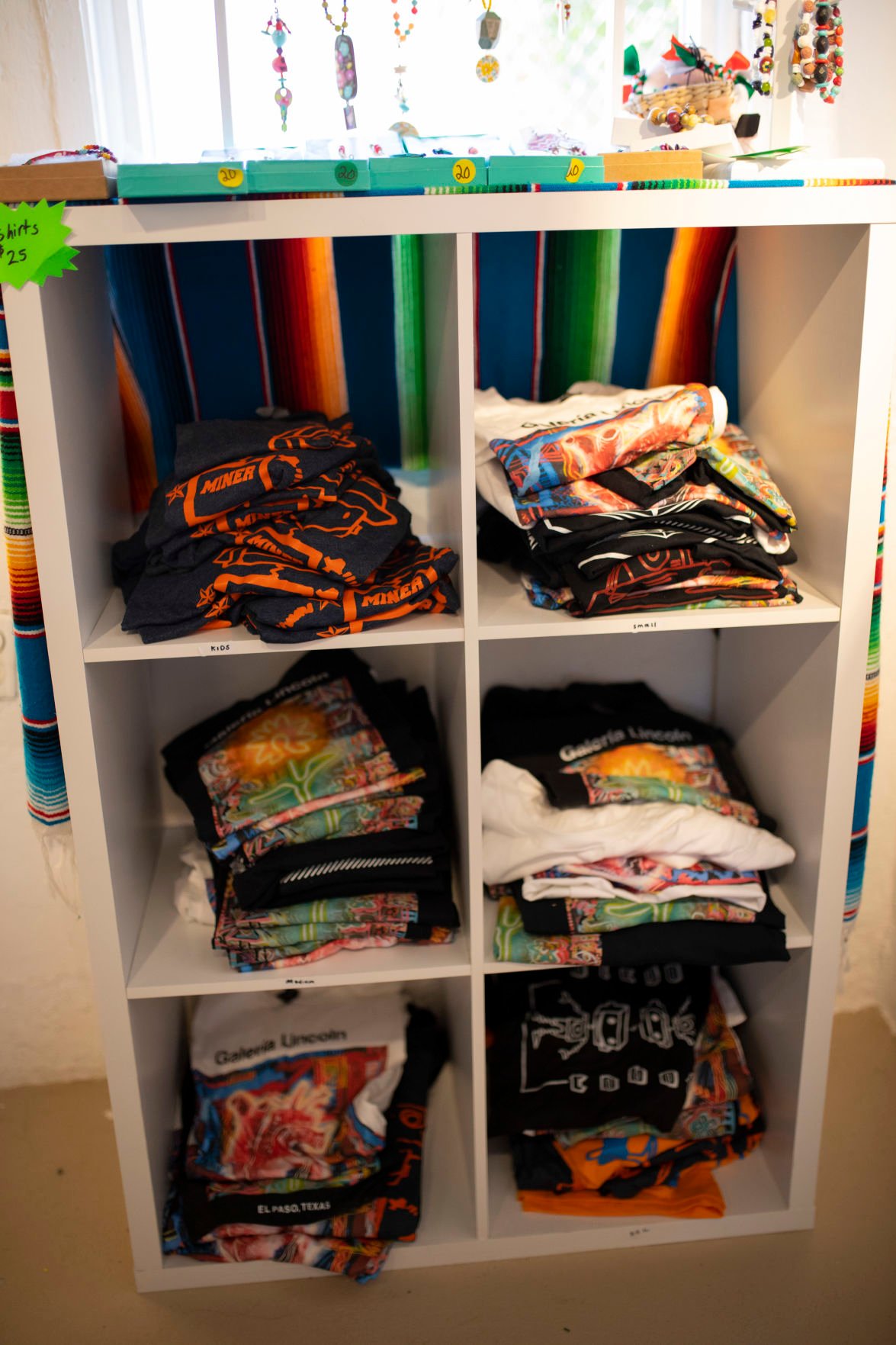 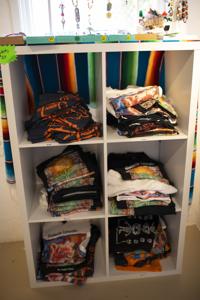 T-shirts are popular items at the gallery.

‘Launch of Something New’ is a piece by borderland artist Diego ‘Robot’ Martinez, who is among the collaborators at the new Galería Lincoln in South Central El Paso.

Crochet art by The Working Bees of San Elizario.

A portion of ‘Paradox Pyramid,’ an immersive art installation and optical illusion by Laura Turon.

Tino Ortega poses with his mural, ‘No Parking,’ which has quickly become a popular Instagram spot.

Diego ‘Robot’ Martinez sits in a clawfoot tub he painted at the gallery.

Work by various artists is available for sale at Galería Lincoln.

Stickers of various themes, including the El Paso Streetcar and the Virgen de Guadalupe, are among the artwork at the gallery.

T-shirts are popular items at the gallery.

In the shade of a yet-to-be-completed freeway in central El Paso sits an unsuspecting adobe house occupied by several of the most ambitious artists in El Paso.

“We’re creating a space to serve as a platform for artists here in El Paso,” said Diego “Robot” Martinez, one of Galería Licoln’s operators along with Tino Ortega. “There aren’t enough people seeing the art that’s coming out of here, and we think the Lincoln Park area is one of those places where we want to keep art present.”

Lincoln Park sits underneath what’s known as the Spaghetti Bowl, where Interstate 10 and U.S. Highway 54 merge in a tangle of freeways that drop motorists in different directions. Some of the pillars in that area, known for their colorful Chicano murals, have been knocked down as part of the Texas Department of Transportation I-10 Connect project.

Galería Lincoln strives to provide another creative center in the area.

“When people open up galleries, they tend to do it for their own art, but we want to focus on other people’s art as well,” Ortega said. “This is a communal thing.”

On the fence surrounding the house, 3915 Rosa, is a large patchwork of crochet art created by a group called The Working Bees from San Elizario, led by Martinez’s aunt, Dora Razo.

Across the street is a brewery called Old Sheepdog, which features several prominent pieces of art from the gallery.

“We have art for sale for all different kinds of incomes and needs,” Martinez said. “Wanna buy an airplane?”

Alongside Martinez and Ortega is another well-known local artist, Laura Turon. Together, they’re on a crusade to bring art to the masses.

The three artists have been making art since childhood on one level or another, and each have a distinctive stamp that makes Galería Lincoln unique.

Martinez attributes much of his interest in his art to his mother, who encouraged him from a young age to explore his ideas as he wished.

“She would let me paint all over the walls, and it was no problem, because you could always just repaint them if you needed to.”

Even behind a face mask, one can tell Diego is smiling ear to ear.His enthusiasm is contagious. One can’t help but be awed by the art – no matter how large, small, intricate or serene – in his presence. A majority of his art features depictions of robots, most of which are given simple yet vivid human emotions and placed in atypical Rockwell-like situations.

“No one thinks ‘robots and feelings,’” Martinez said. “You can adapt and make the robot into any character, so it allows me to mold and shape him in endless ways.”

Another recurring theme in his art is the Sun City itself. A painting of a bright yellow sun over the Asarco smokestack notably brightens up the room.

Ortega’s work is characterized by a kind of hyper realism – works that blur the line between photorealism and depiction.

On the wall of the nearby brewery is one of Ortega’s more noteworthy pieces: a mural depicting four cellophane balloons that spell out “I (Heart) EP.”

You can see the reflections in the balloons of a passer-by and several cars on the street that aren’t even there.

Ortega grew up looking up to artists like Alex Gray, the man responsible for most of Tool’s mind-bending album covers, and says that being exposed to that kind of art from a young age helped stir his passion for the medium.

He has a kind of quiet intensity – when he’s not talking, you can see the storm of ideas gathering in his head for his next idea.

It seems as if there’s constantly a piece of art about to emerge from his hands at any moment.

Turon’s signature design is the most prominent motif recurring throughout the grounds of Galería Lincoln.

It’s a distinct latticework design of what appears to be curves and waves, but when viewed up close, is actually entirely comprised of straight lines and angles.

Two of the most prominent installations in the gallery carry this motif: the fuselage of a fighter plane painted in dazzle-paint gold and black, and a large “Inverted Pyramid” which is a Suspiria-like purple and cyan on the outside and a shapeshifting teal on the inside that matches her eyes.

“It’s an immersive interactive space where you can experience art in a different way,” she said.

“You take pictures, videos, selfies, and be surrounded by an environment that might change your mood or feeling. I hope that it makes people feel at home and opens them up to make them want to express themselves.”

Outside of the gallery, Turon operates and is the creative mind behind Paradox Traveling Art – a bus designed similarly to the pyramid – that she hopes to incorporate into Galería Lincoln someday.