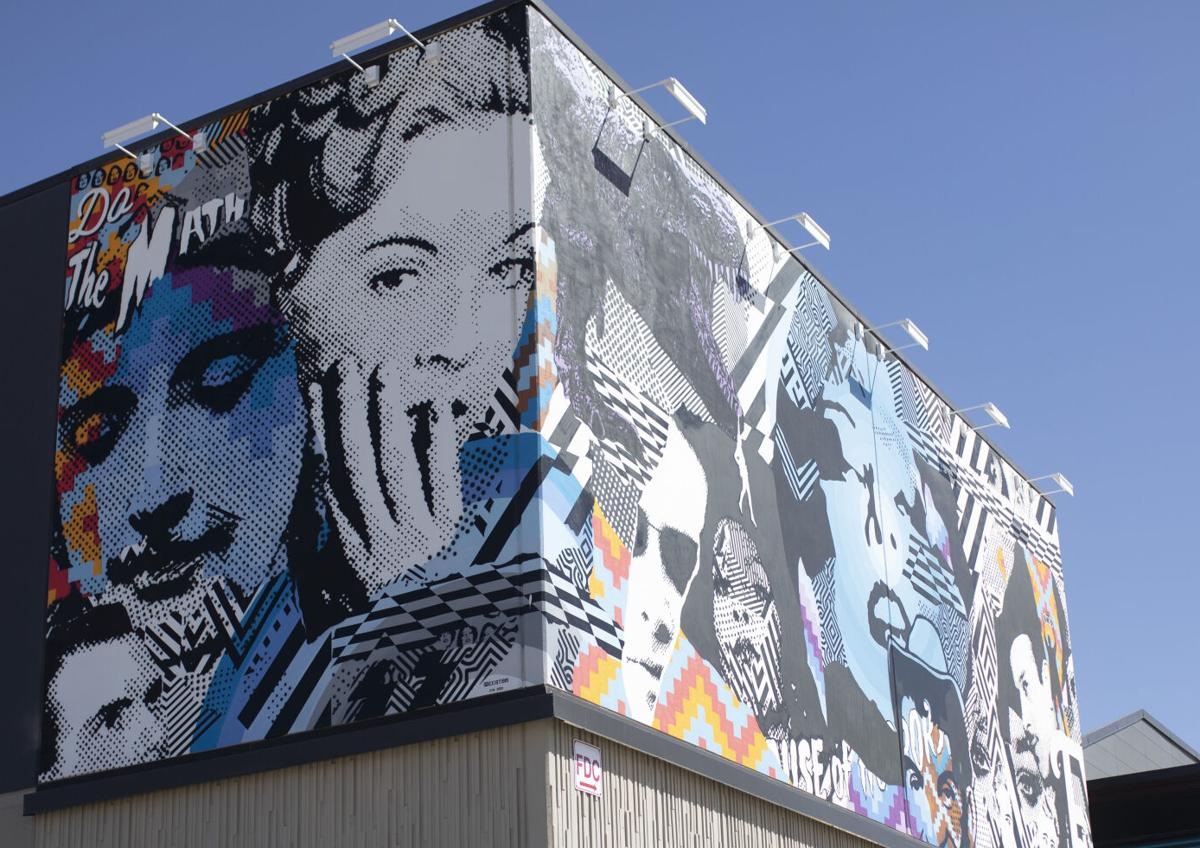 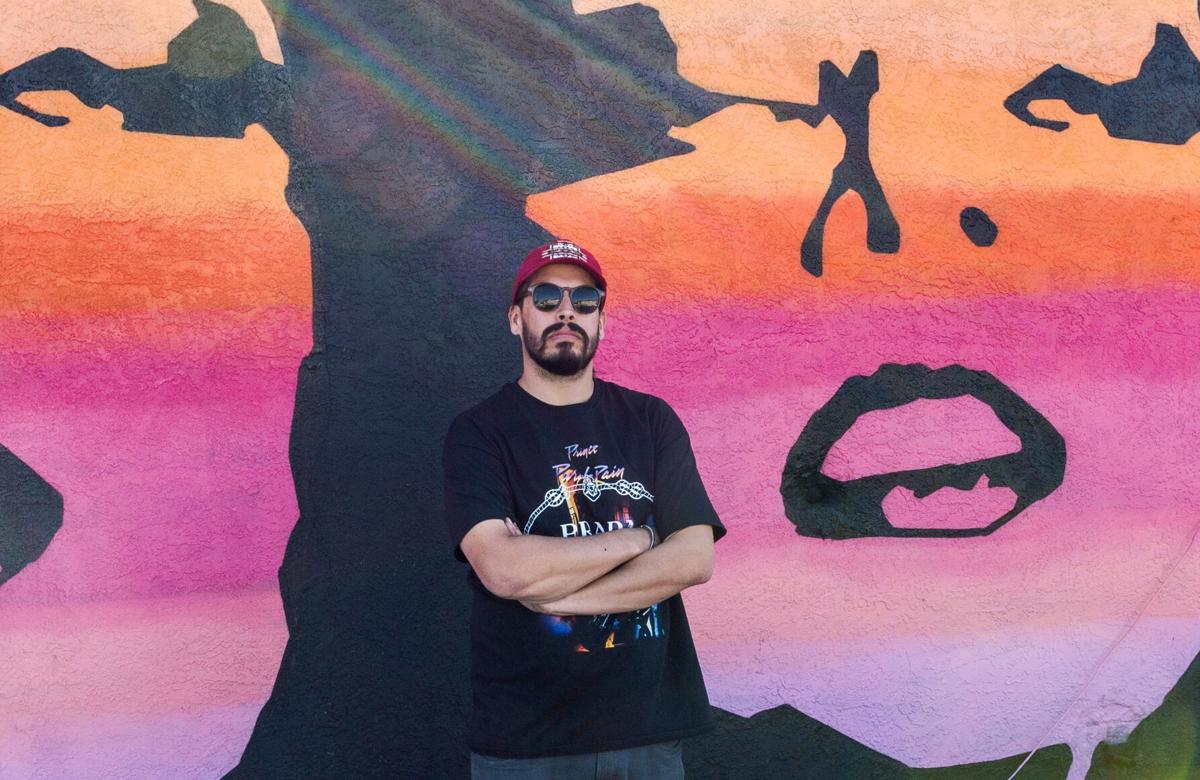 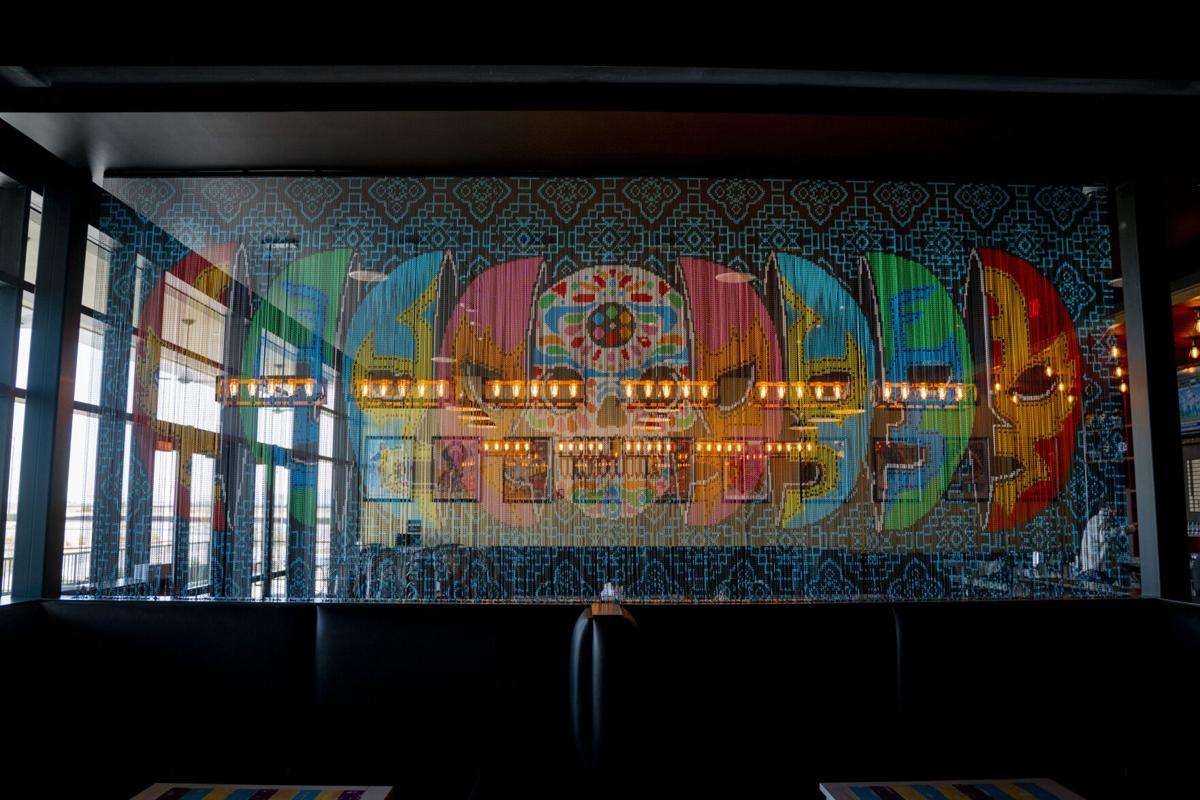 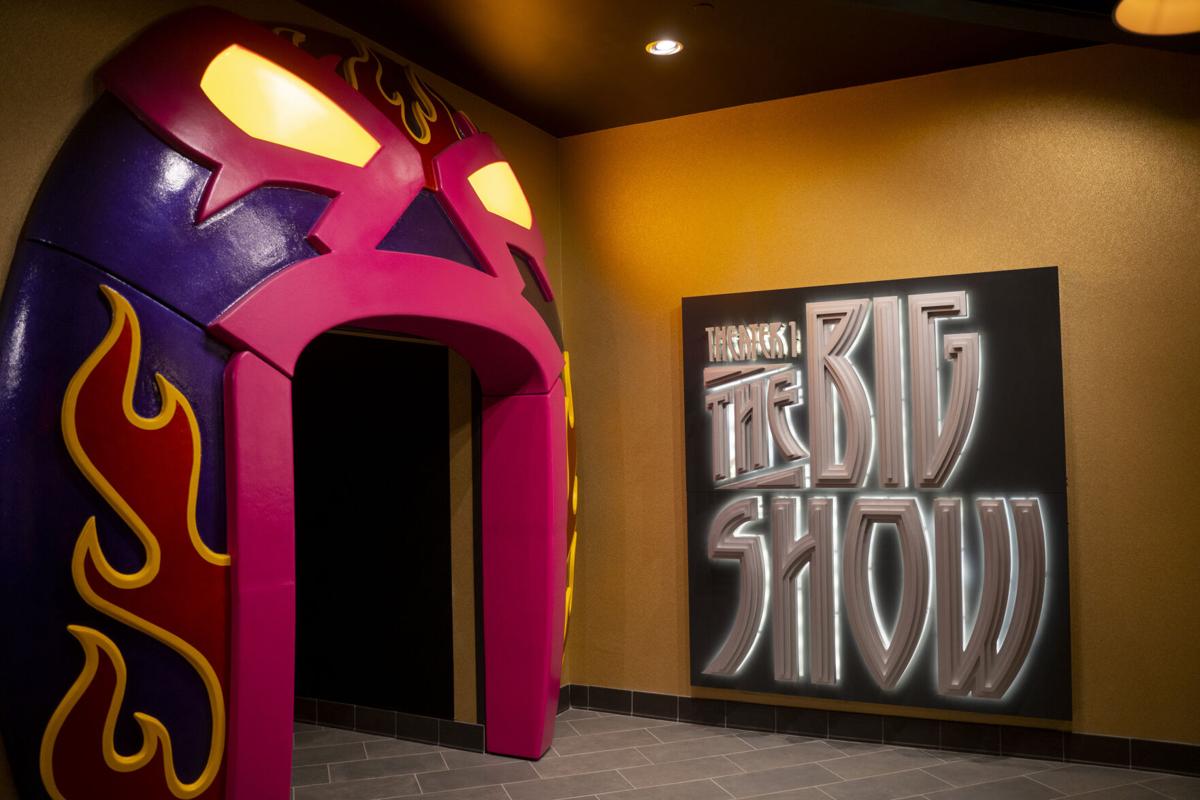 The entrance to a theater features a luchador mask design. 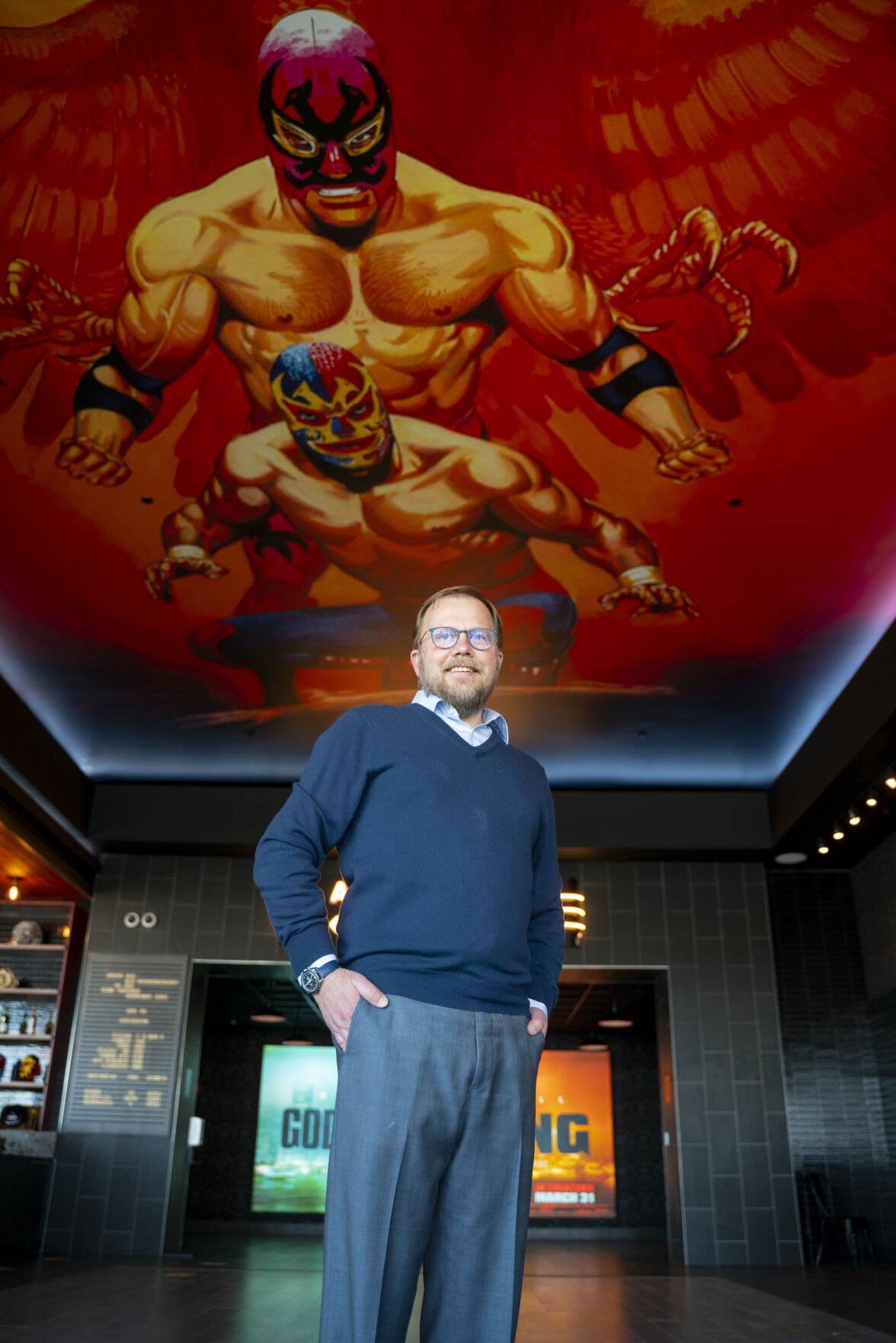 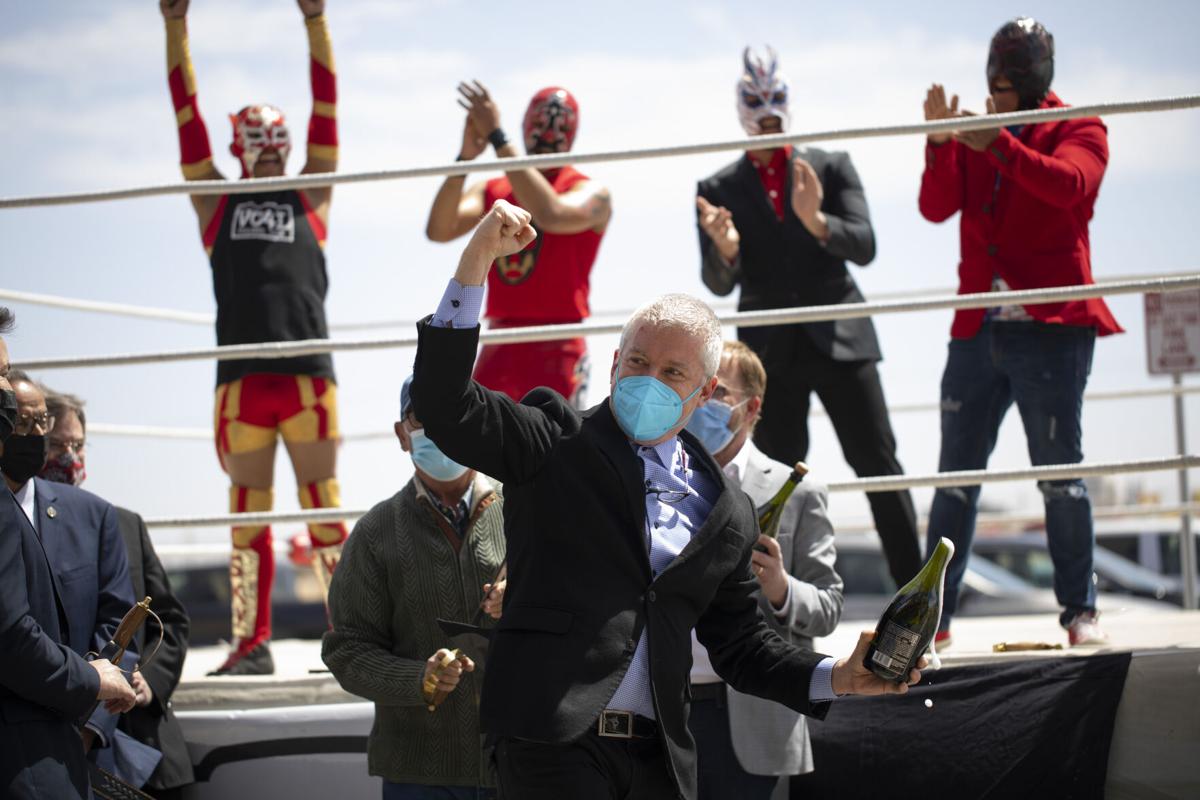 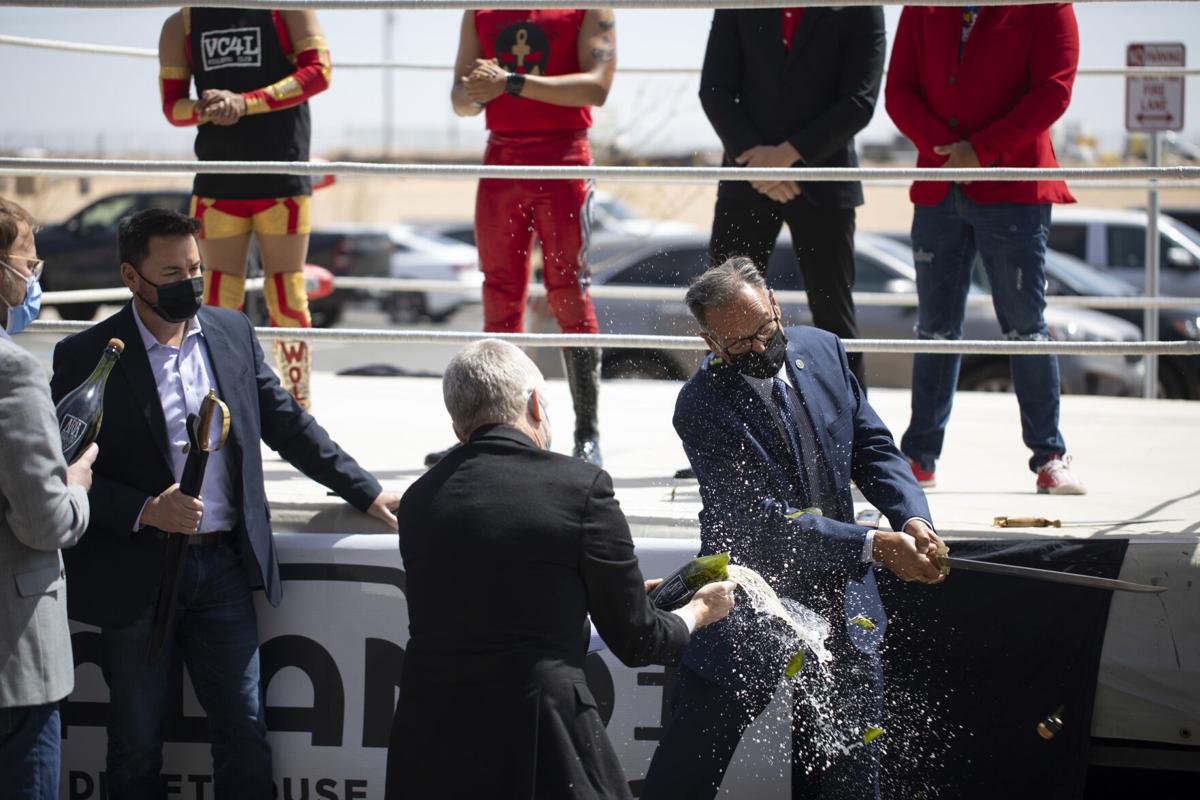 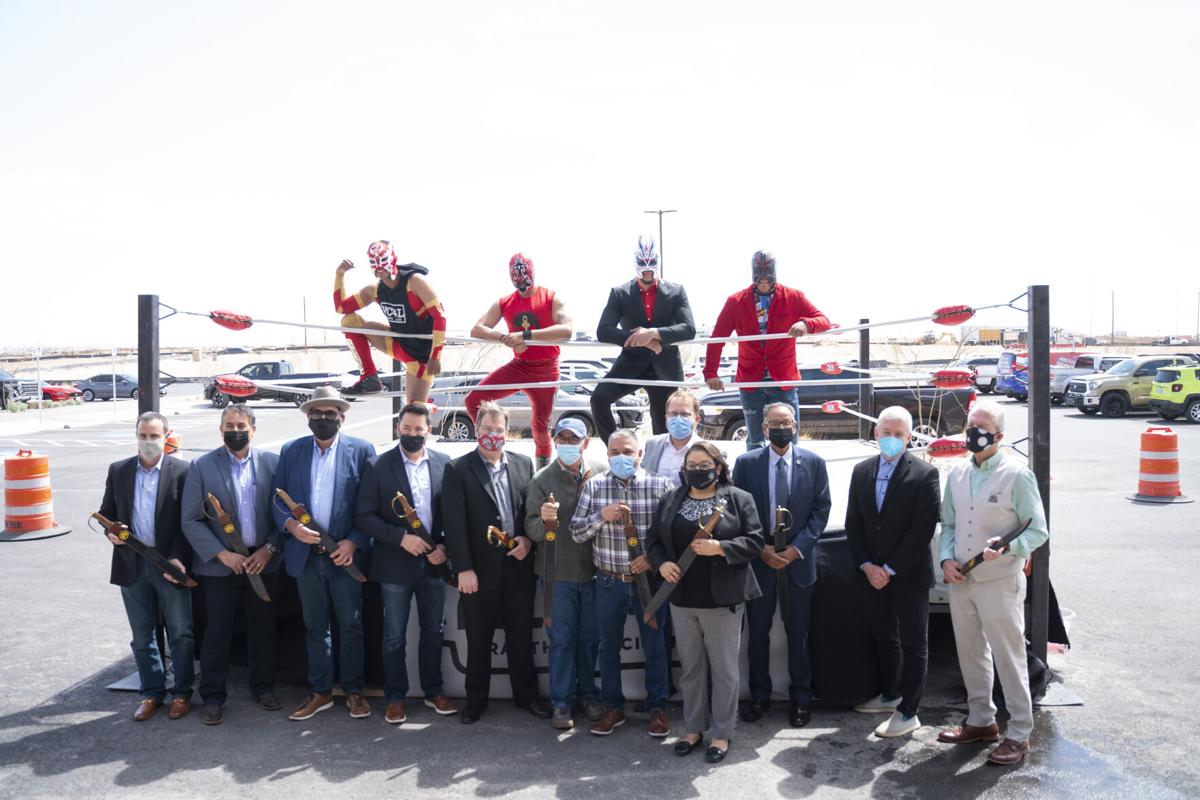 The entrance to a theater features a luchador mask design.

For film-lovers, Alamo Drafthouse Cinema is more than just a trip to the movies. It’s an immersive experience.

Now, the long wait for the Alamo Drafthouse Cinema East El Paso location is over. It held its grand opening on Wednesday, March 31, after a soft opening March 26.

Walking the lobby and halls of the new cinema, the theme is hard to miss: Mexican luchadores!

And don’t forget the 45 craft beers on tap, a delicious menu, all new state-of-the-art sound and projection, and the 70-foot screen inside The Big Show, which also features Dolby Atmos surround-sound.

But perhaps the most remarkable piece for those who love both art and movies isn’t inside the theater. In fact, it’s visible from the freeway as you approach the cinema, located at 12351 Pellicano at the corner of Joe Battle Boulevard.

You may have seen other murals by EXIST around town, including the large shipping container at TI:ME shopping center, inside Malolam Cantina, Downtown’s The Mix and Aloft Hotel, and the exterior of the Cincinnati Street bar, Good Times at 2626. He has also curated and directed all of the murals painted at Montecillo and during Neon Desert Music Festival.

His murals also feature a signature detail, a face of what appears to be a woman – or maybe it’s Tim Curry in Rocky Horror Picture Show.

The mural outside of Alamo Drafthouse Cinema East El Paso includes nods to American pop cinema as well as stars from the Golden Age of Mexican cinema like Pedro Infante, Tin Tan (Germán Valdés, who was raised in our sister city of Juárez) and Cantinflas (Mario Moreno Reyes).

El Paso Inc. talked to EXIST about the new mural at Alamo Drafthouse, his work – and oh yeah, that face.

Q: How did you get commissioned to do the new mural at Alamo Drafthouse - East El Paso?

I was lucky enough to do a smaller mural in the bar at Alamo’s Montecillo location. When I was asked to tackle this new large piece, I just went for it. I’m always looking to go bigger and better.

Q: What was the inspiration?

The inspiration for this piece is cinema -- Mexican and American -- but it was important to me and to the folks at Alamo to include a lot of regional heritage. So I included some traditional Mexican patterns and colors.

Q: Is this the largest mural you’ve done?

Q: How long did it take to complete?

It was two weeks. Fourteen days of hard work and late nights, but it’s a labor of love. It’s something I see myself continuing to do for a long time.

Q: Why is it important for local artists like yourself to be featured on a project like this?

El Paso is my hometown. Exposing locals to art and elevating El Paso to the level of other big cities with progressive public art is something that I’m very committed to, not only as an artist, but by curating murals. El Paso has a ton of talented artists and it’s important to provide opportunities for locals to make their mark on the city.

Q: How does it feel to have it complete and for the cinema to be open to guests?

I worked on the mural in 2020, arguably one of the toughest years our city has seen in modern times. This project was a wonderful distraction for me during the pandemic. Hopefully, the mural and a trip to the movies can serve as a brief, beautiful distraction for all who come to Alamo. It feels amazing to have raised the bar for myself and complete it.

It’s always a goal of mine to go bigger, and have something that people can look at, enjoy and beautify the area. I consider my style to be “maximalism.” There’s a lot going on and I hope people will stand back, take it all in and try to find as many elements as they can. There’s a lot of little details that can keep you busy for a while.

Q: Everyone wants to know: Who is the woman in all your pieces?

Who is she? Some people think its Madonna or Marilyn Monroe. Some people say it looks like Tim Curry from Rocky Horror. The truth is, it is nobody in particular. It’s a face made up of three faces, it doesn’t have an identity. It’s supposed to be subjective and open-ended. I think it represents an expression of bliss.