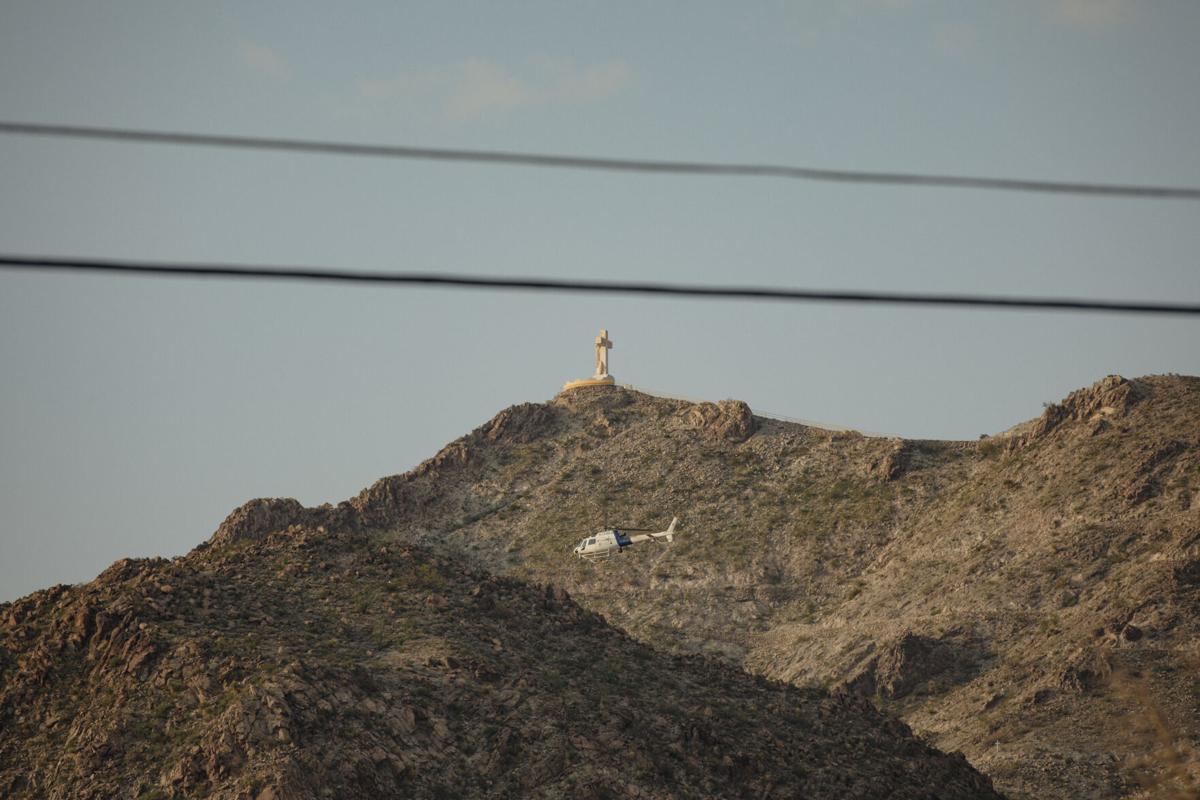 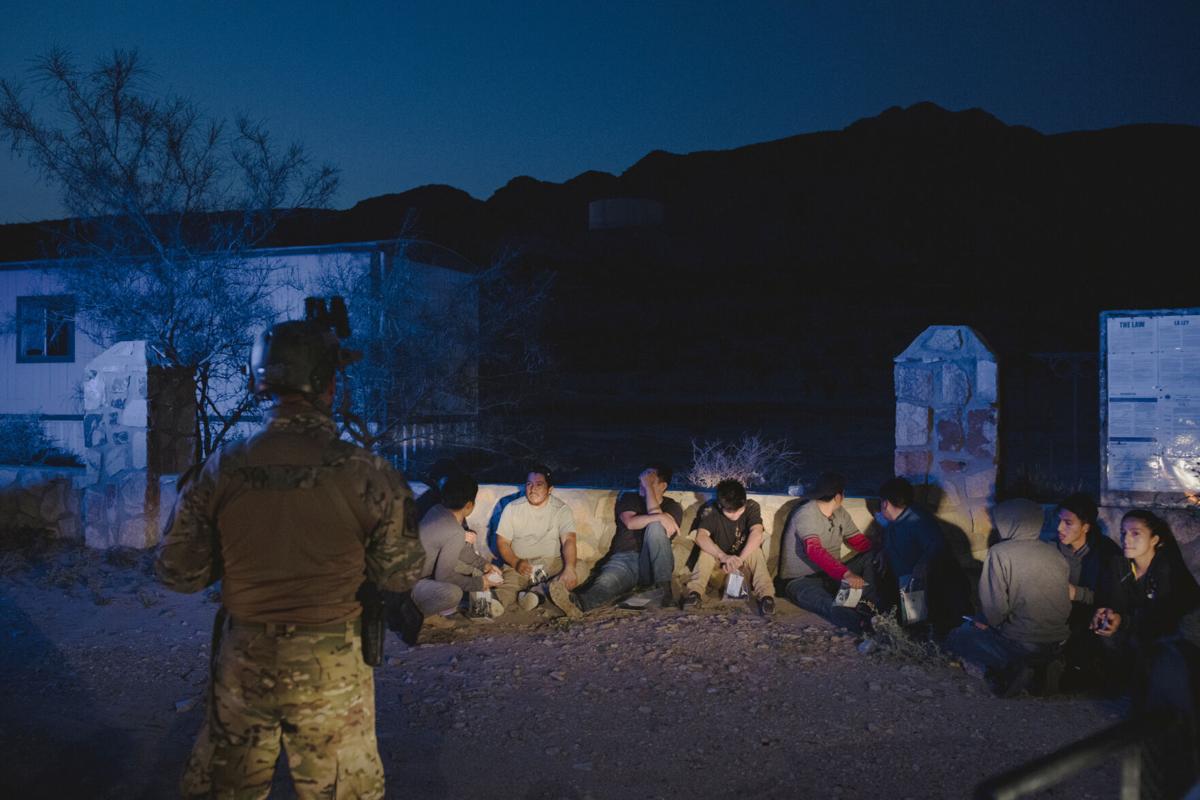 A large group of migrants who crossed the border via Mount Cristo Rey. 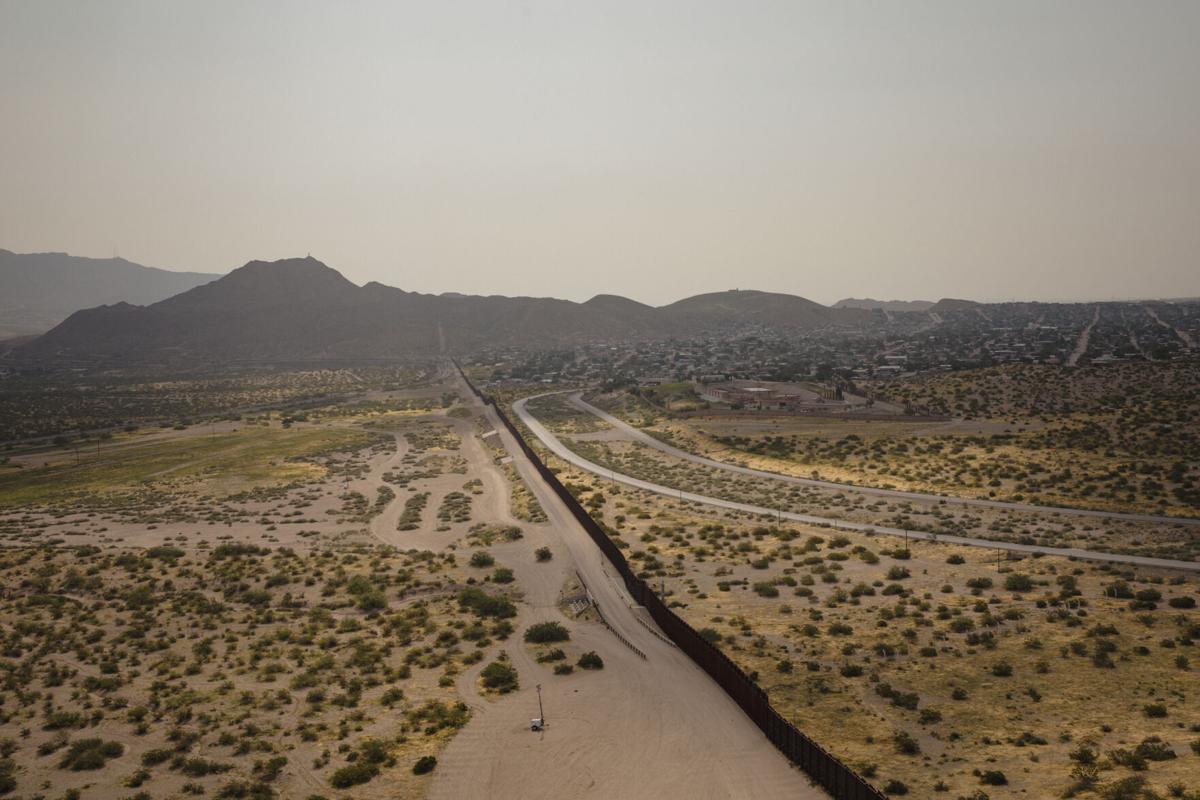 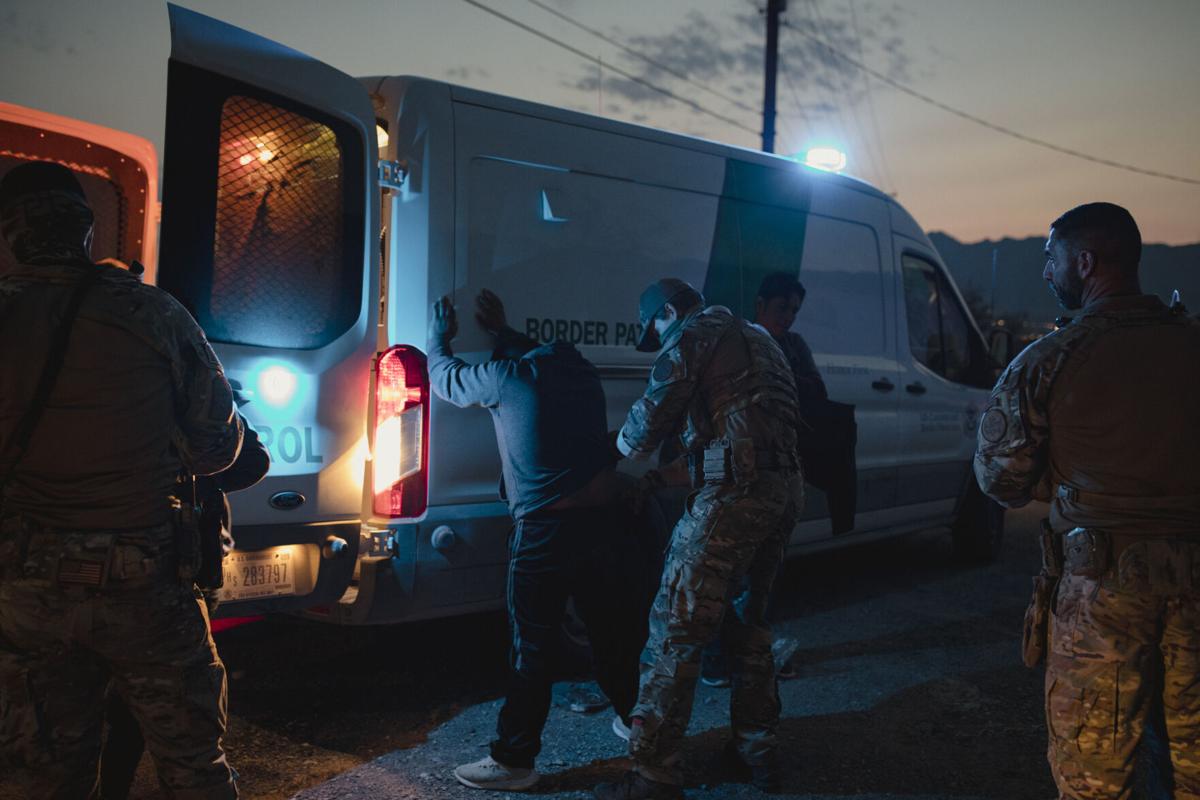 An agent with the Border Patrol Search, Trauma and Rescue Unit searched a migrant after apprehending him near Sunland Park, N.M., in July.

SUNLAND PARK, N.M. — Towering over the borderland, Mount Cristo Rey is nature’s barrier between Mexico and the United States. Each year for nearly a century it has drawn thousands of people who tread up a constellation of switchbacks representing the “Via Crucis,” or Way of the Cross, to pray beneath the 29-foot-tall limestone statue of the risen Christ at the summit.

The holy mountain boasts a sweeping view of three states — Texas, New Mexico and Chihuahua in Mexico — and these days attracts not just the faithful, but the desperate, too: migrants from around the globe trying to enter the United States undetected, for here there is no border wall.

In the dark hours past midnight recently, several groups of men set out over the mountain’s jagged, gravel-coated slopes as the lights of El Paso twinkled in the distance. But as they descended, they were spotted by agents with the U.S. Border Patrol, who rounded up 16 of them along a roadside.

“The truth is, most people made it,” said Evandro, a 31-year-old Brazilian migrant, his eyes bloodshot from fatigue, who had watched many of his fellow travelers dash to freedom through a jumble of nearby mobile homes and ranches. “We were just unlucky.”

Some 800 miles southeast in the Rio Grande Valley, a similar scene unfolded before sunrise. Six men who had waded across the river, hopeful of reaching Houston, now stood in their tattered, damp clothes in the custody of agents. After journeying thousands of miles from Honduras and savoring “the adrenaline of touching this country,” as Elias Galindo, 25, described it, they would go no farther.

Soon, both groups boarded white-and-green Border Patrol vans that ferried them to processing stations. Within hours, they were deported to Mexico.

Apprehensions on the southwestern border in July reached their highest levels since 2000, with an average of more than 6,700 arrests a day. But the numbers are deceptive. An emergency coronavirus health measure, extended this past week by the Biden administration, allows many adults traveling alone to be swiftly expelled rather than go through lengthy deportation proceedings. That means that many of the same migrants end up trying again and again — until some of them succeed.

“The agents are overwhelmed,” said Gerardo Galvan, agent in charge of the Border Patrol station in Santa Teresa, New Mexico.

In the dog days of summer, when migrant crossings usually subside, the influx this year has been unrelenting.

The number of migrants apprehended in the El Paso area has increased threefold this fiscal year, with 135,326 arrests, nearly 80% of them single adults. Equipped with motion sensors, long-range infrared cameras and aerial drones, Border Patrol agents say they believe that most of those crossing the border are apprehended — although no one really knows how many manage to get away.

The heat this time of year is unforgiving, and the terrain hazardous. In mid-June, the body of a Mexican woman was found near the base of Mount Cristo Rey.

Jeremiah Blount, an El Paso agent, said he had encountered migrants bound for nearly every state. One group of migrants, he said, was arrested on five consecutive days. “I ask them, ‘You haven’t made it to New York yet?”

‘The only thing I’m carrying is fatigue’

As the town of Sunland Park awakened, an agent on horseback and another on an all-terrain vehicle guarded three men sitting on the ground until other agents could arrive to take them away.

They ordered the migrants to remove their shoelaces and then stand up, hands behind their backs with legs splayed.

“Are you carrying anything that could hurt someone?” one of the agents, Joel Freeland, said as he patted down one man.

“The only thing I’m carrying is fatigue,” responded the man, Obdulio, 41.

Toothpaste, a toothbrush, a phone charger and a foot bandage were retrieved from pockets and tumbled onto the dirt.

“Where are you from? Do you have visas?” Freeland asked, even though he knew the answer.

He handed the men masks and instructed them to place their cellphones and passports in Ziploc bags. One of the migrants, a scrawny 21-year-old in a camouflage shirt, struggled to remove his black-cord choker, and the agent snipped it off.

All three were from Honduras.

“I came to do any honest job,” said Obdulio, a carpenter who did not share his last name. “There isn’t enough work in my country. I have three children.”

He said that he and his two companions had traveled 16 days by train and bus to reach Ciudad Juárez, the Mexican city across from El Paso. But they had come to the end of their journey.

Later that morning, an agent positioned behind a camera with a long-range lens detected migrants emerging from the brush near Mount Cristo Rey and radioed colleagues.

Soon, two migrants in mud-caked trousers were handcuffed and leaning against a Border Patrol vehicle. A patrol helicopter hovered overhead.

They and three other men had been climbing into a silver Infiniti near the base of the mountain when agents drove up, catching the two before the other three sped off in the car.

One of the detainees, Alex, 30, from Ecuador, was wearing a bead necklace with a crucifix and an Our Lady of Guadalupe pendant for protection.

It was his first attempt to cross into the United States, he said, and he had paid a smuggler thousands of dollars to guide him toward New York.

“I’m a noble man,” he said. “I came to fight for a better life, and to provide for my family.”

‘I would have done any work’

Shortly after, at 8 a.m. in the Rio Grande Valley, Jesse Moreno spotted fellow agents stopped on the side of the road and pulled over.

In the bed of their pickup truck, a woman named Lillian Lopez, 30, dried her tears.

She had started her journey from Honduras two months ago, she explained, riding several trains, including the notorious La Bestia, which has claimed the lives of many migrants who cling to the tops of the moving cars.

“It was dangerous,” she said, holding up an injured left hand.

She had planned to work in Houston to support the three children she had left with a brother.

“I came here to provide them with an education,” Lopez said. “I would have done any work.”

A few minutes later, Moreno’s radio crackled back to life. Less than half a mile away, a group of about 15 men, women and some children had been intercepted.

Many of them sat on the ground under the burning sun, looking dejected. The agents handed them masks and bottles of water.

Ana Hernandez and her 8-year-old daughter, Sheila, of El Salvador, had reached the border by bus. It was their second attempt.

Hernandez pulled her daughter’s mask down. “Look at her face, full of scratches,” she said, remnants of their rough trip through the border brushlands. “I kept telling her, we are almost here. Once we are there, we are going to have a better life.”

The last time they had crossed, two weeks earlier, she had tried to apply for asylum but was refused, she said. Now she hoped to evade the agents.

By the end of the night, she was back in Mexico.

Not far from where Hernandez had been first detained, a visibly frustrated migrant named José Domingo waited to board a Border Patrol van and tried to explain why he had tried to sneak across the border.

Domingo, 40, asked the agent if he could stand up to look him in the eye. After wiping his sweat and shaking his head, he began his story:

Years ago, he told him, while living in Tapachula, Mexico, he had applied for a visa to enter the United States, hoping to find work as a carpenter. But he had never received a response, he said. “I had no choice. I had to cross illegally.”

When agents intercepted him, his heart sank, he said, knowing that he would be deported. “You feel sadness, knowing that you were so close to achieving your goals,” Domingo said. “I tried.”

“I had the radio and a citizen saying there were people up there,” said Jara, a 13-year veteran of the Border Patrol. “I was hoping to get lucky.”

But he had made the 4.5-mile round trip in vain.

“They’re up there right now watching us,” he said.

That afternoon, an agent named Fernando Gomez escorted a group of about 20 migrants to the Paso del Norte Bridge that connects El Paso to Ciudad Juárez and sent them back across to Mexico.

Another group followed. Then another.

Later that night, the moon rose over Mount Cristo Rey, known in popular culture as the place where the man in the classic Marty Robbins song “El Paso” fled the scene of his crime at Rosa’s Cantina to the badlands of New Mexico.

Around 10 p.m., Blount idled in his vehicle below the mountain. Soon, he said, migrants would begin making their way down from the summit.

“The circus music is about to start,” he said.

He drove about a third of the way up the mountain where another agent was combing the area with his infrared night vision camera after a sensor had picked up movement.

He found no one. Maybe it had been a mountain lion or coyote. For now, only large moths fluttered around a mobile flood light.

The next morning, José Luis, a 54-year-old car mechanic from Mexico, showed up at Casa del Refugiado, a shelter in El Paso. He had made his way off the mountain during the night, he said. He had managed to elude capture.

“It took me a day to get over that mountain,” he said.

“God made me invisible to get here.”