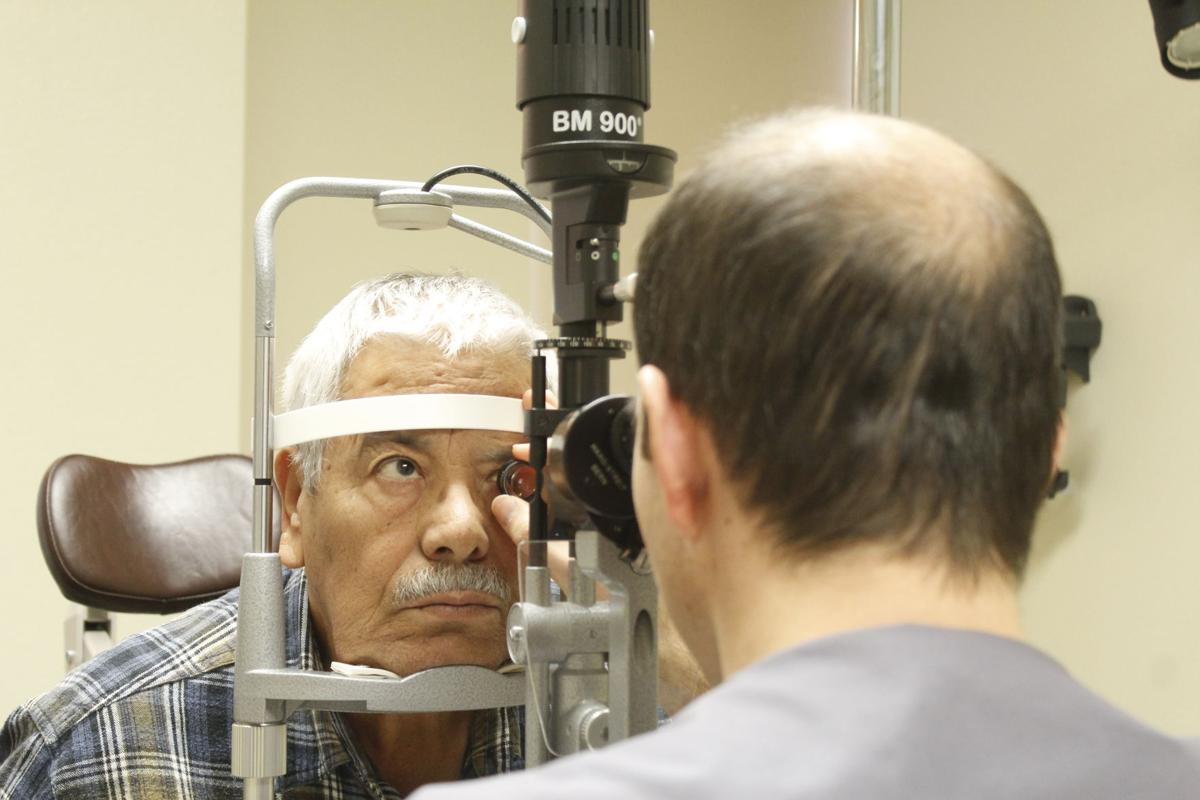 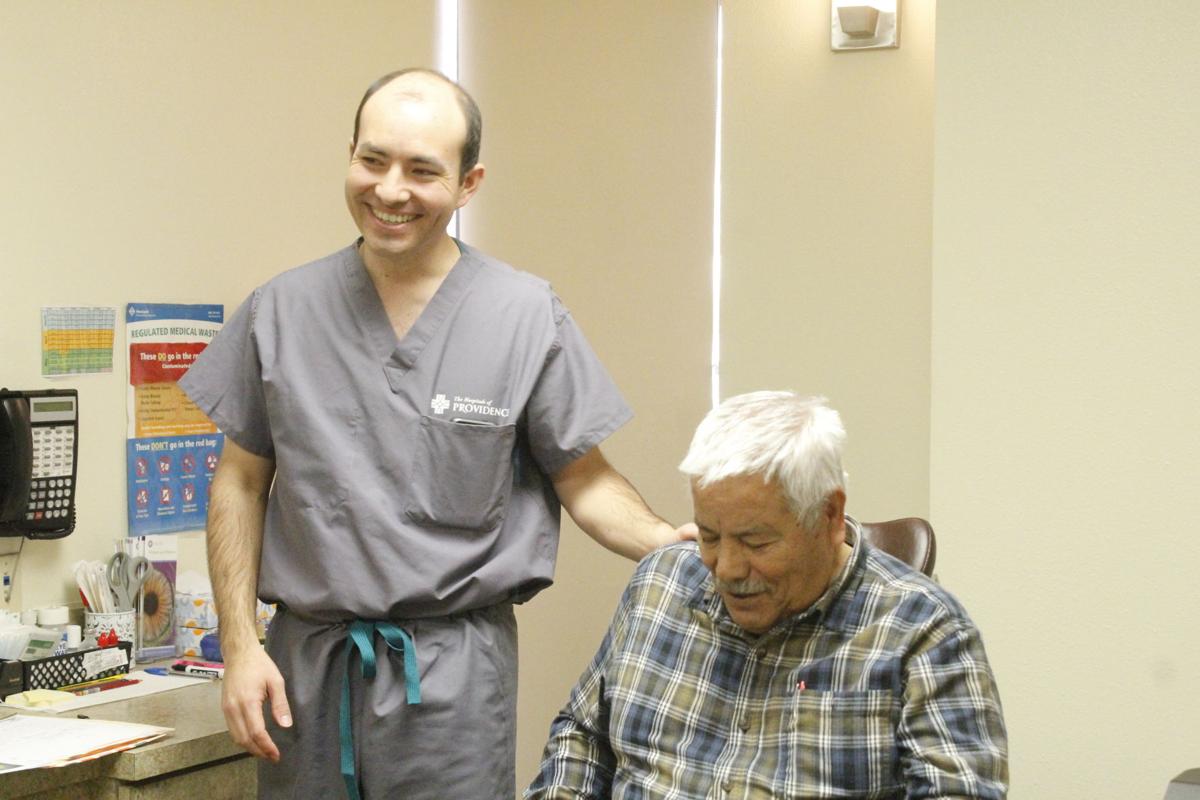 Kasuga says retinal detachment is the No. 1 cause of blindess for people with diabetes.

Kasuga says retinal detachment is the No. 1 cause of blindess for people with diabetes.

El Paso leads the nation in diabetes, and blindness is a major side effect of the disease that impacts older Hispanics more than any other group in the United States.

I learned about the diabetes connection to blindness after having my own scary encounter with a vision-threatening eye problem in February.

I was on my way to get a haircut on a Saturday morning when I noticed what looked like gnats buzzing around. But they weren’t in the car with me; they were in my right eye.

Then, I noticed scores of tiny black dots that seemed about the size of a period on this page in an orderly pattern everywhere I looked.

On the way home, a black monster appeared, whisking around, vanishing and reappearing like one of Harry Potter’s Dementors from Azkaban prison.

Once home, I did the same thing anyone would do: I Googled.

“What’s this stuff floating around ...” and Google finished the question, “in my eye?”

“Eye floaters can be clumpy or stringy, light or dark,” the All About Vision blurb at the top of a long list of websites said. “They are caused by clumps or specks of undissolved vitreous gel material floating in the dissolved gel-like fluid (vitreous) in the back of the eye, which cast shadows on the retina when light enters the eye.”

Often they just go away, but sometimes “they can signal other problems,” it said.

I’d never heard of floaters before, but I read all about them that weekend. What I learned pointed to a detached retina, which could result in blindness if accompanied by flashes of light in the eye.

That gave me nightmares because I was seeing strange flashes of light with my eyes closed at 3 a.m.

Gulbas did cataract surgery on both my eyes several years ago, which, it turns out, is one of several risk factors for a retina detachment in the future.

A much bigger predictor is diabetes.

According to a 2010 National Institutes of Health report, “Hispanic Americans age 50 and older had the highest rates of diabetic retinopathy, 8 percent, compared with a 5 percent prevalence rate in blacks and whites.”

El Paso ranks first with the most people with diabetes among 100 of the most populated metro areas, according to Wallethub.com.

The next morning, co-workers young and older shared stories about their floaters with me, which was comforting. But it turned out that my nasty black floaters and their translucent ones were not quite the same.

Things moved very fast when I saw Gulbas that Tuesday. He said the most common complaint he gets from patients is about floaters, and then he took a look after my eyes were dilated.

“I’m referring you to Southwest Retina Specialists, and you need to go now,” he said.

A couple of hours and dilation later, 36-year-old Dr. Daniel Kasuga, their newest retina specialist, met me in an examination room.

He’s from the San Francisco Bay Area, learned Spanish during a year of medical study in Granada, Spain, and then chose to practice in El Paso after completing his 11 years of medical education and training.

After a lot of looking into my eye with a small, bright light, he said my floaters were bits of blood and other material resulting from a separated and torn retina.

“A lot of people have floaters – little black dots that circle around like gnats,” Kasuga told me later for this article. “They’re not necessarily dangerous. What is usually dangerous is a sudden change, meaning you have five and suddenly it goes to 200.

“That’s the dangerous thing. Retinal tears also have flashes of light. The third thing exclusive to a retinal detachment is a change in your peripheral vision. Normally it’s described as a black curtain that comes from one side.”

I didn’t get the curtain, he said, because I acted before it started closing.

He asked if I’d been in an accident or had a blow to the head lately because that could be the cause. The answer was no, but I remembered that the Friday before the floaters appeared, I had sneezed hard three times at work.

Dr. Kasuga said he’d never heard of anyone suffering a detached retina because of a sneeze. But, digging around medical sites on the internet later, I found a case study suggesting that sneezing could have been the cause.

But I needed surgery, he told me, and the sooner the better. He checked with The Hospitals of Providence Sierra Campus across the street and, because I hadn’t eaten all day, he said he could do it in two hours – at 4:30 that afternoon.

He advised me that the surgery he would perform to repair a tear and reattach the thin retinal layer that lines the back of the eye is about 90 percent successful – meaning that 10 out of 100 are not.

But the alternative to surgery would be eventual blindness in that eye.

There was time for phone calls to my wife and work, and a few minutes later, a nurse walked me down the stairs of the 1700 Curie medical building, gave me a file with my orders and pointed me to the hospital across the street.

I was half-awake during the surgery, but the only thing I remember or felt was the itch on my nose that I kept trying to scratch.

Kasuga later explained that he had entered my eye in three places, drained it of the jelly-like vitreous liquid, used a laser to effectively stitch up the tear in the retina and, finally, injected a gas bubble into my eye to hold the retinal layer against the back wall of my eye.

My wife picked me up several hours later, and I spent the better part of the next eight days looking straight down or on my left side while watching TV or sleeping, which I did with a protective plastic cup over the eye.

When I was looking down or on my side, the bubble held the retina in place, allowing it to reattach the layer of sensors that convert the light that enters the eye into signals the brain translates into images, a lot like a camera.

In a week or so, the eye refills with vitreous liquid, the gas dissipates and vision returns. I was back at work nine days later.

“There are certain doctors that would probably position you face down longer than a week,” Kasuga said. “I believe every doctor here ascribes to one week is plenty of time.

“I don’t think keeping your head down longer will change anything.”

The kind of problem I had is pretty rare for someone who doesn’t have diabetes – one case per every 10,000 people.

“But with diabetes, it’s the No. 1 cause of blindness in this country,” Kasuga said. “If you have diabetes, you should have an eye doctor check you once a year.”

“That’s because a lot of times you will have disease happening in your eye, and you’re not aware of it because your central vision is being preserved, so by the time you get in to see an eye doctor, you may already have a bad disease.”

For the diabetic, he said, the best way to protect your eyes is to keep it under control.

“That’s more important than anything else,” Kasuga said. “If they can keep their A1C blood test below 7, the chances of going blind from diabetes is much lower.”