Starting at
$48.75 for 365 days
Get Started
View all rates
You are the owner of this article.
Edit Article Add New Article
You have permission to edit this article.
Edit
News
Opinion
Calendar
Lifestyle
Obits
Book of Lists
El Paso Inc. Magazine
Best of El Paso
Special Projects
Advertising
Subscribe
Legals
1 of 4 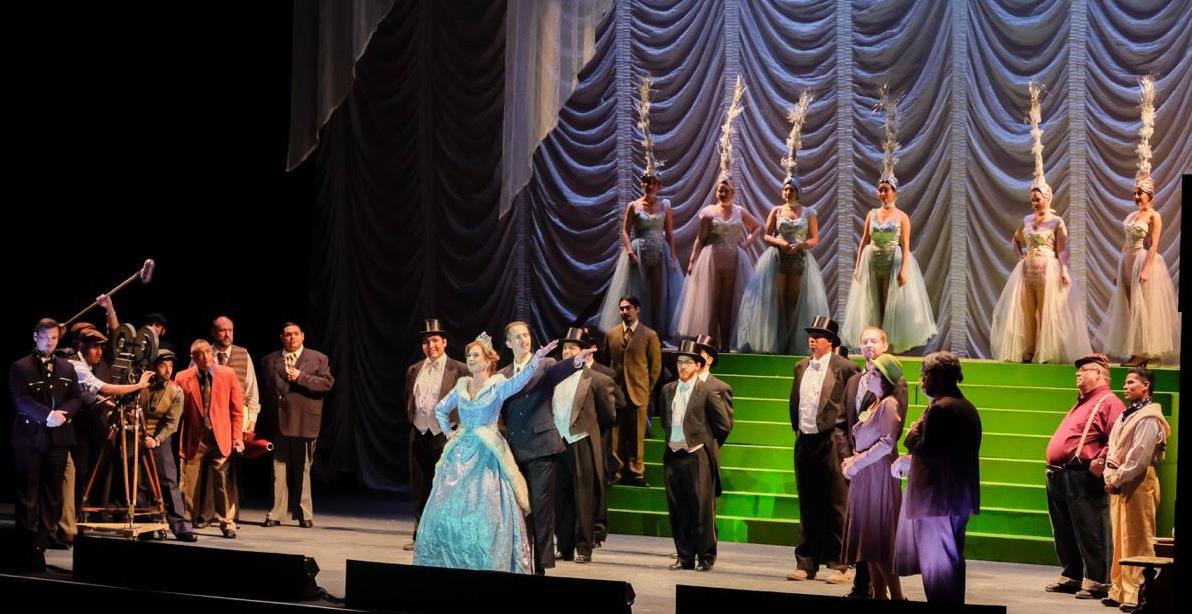 The grand finale of ‘Cinderella’ performed by El Paso Opera. 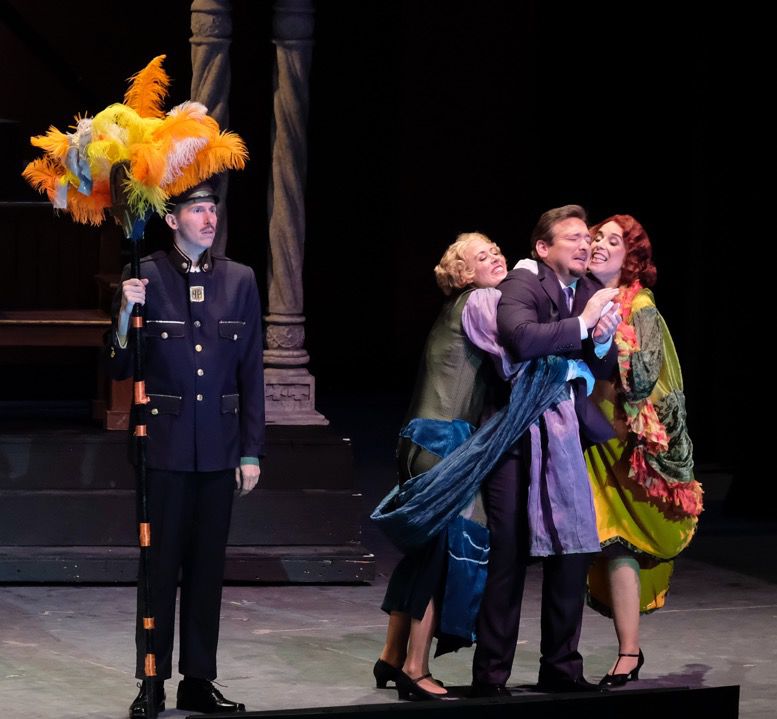 Ramiro, disguised as a chauffeur, stands by as Dandini and the stepsisters cavort. 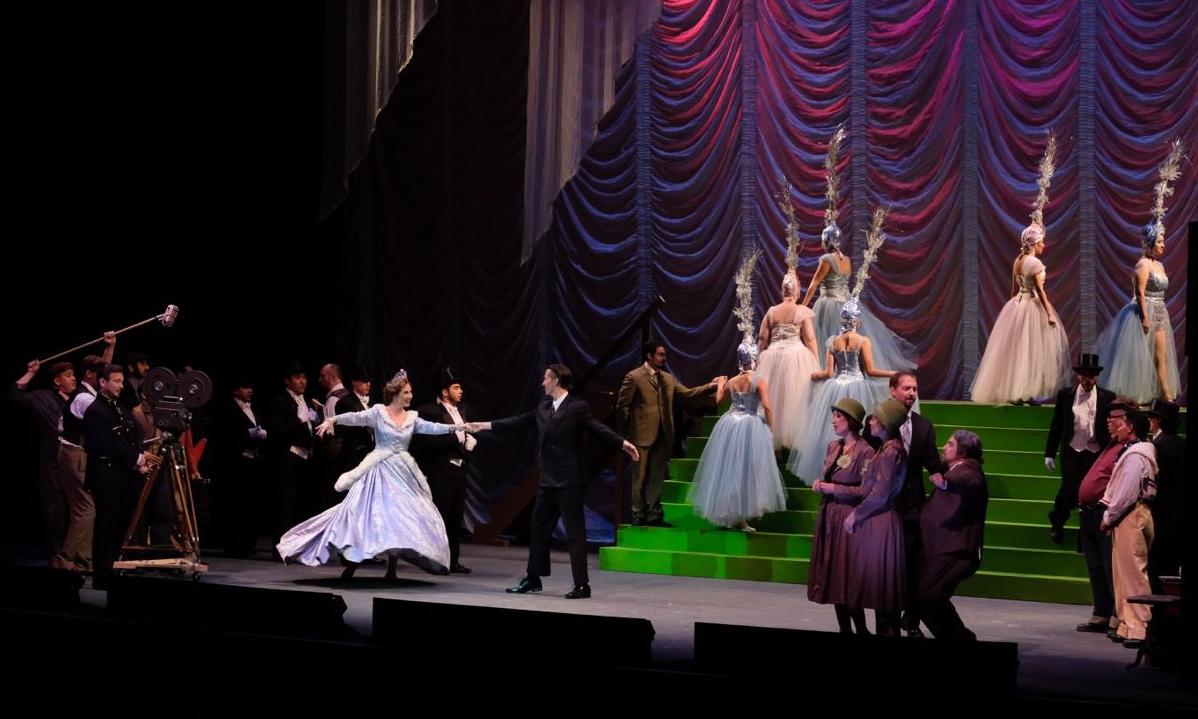 Cinderella and her prince dance the night away on the movie set. 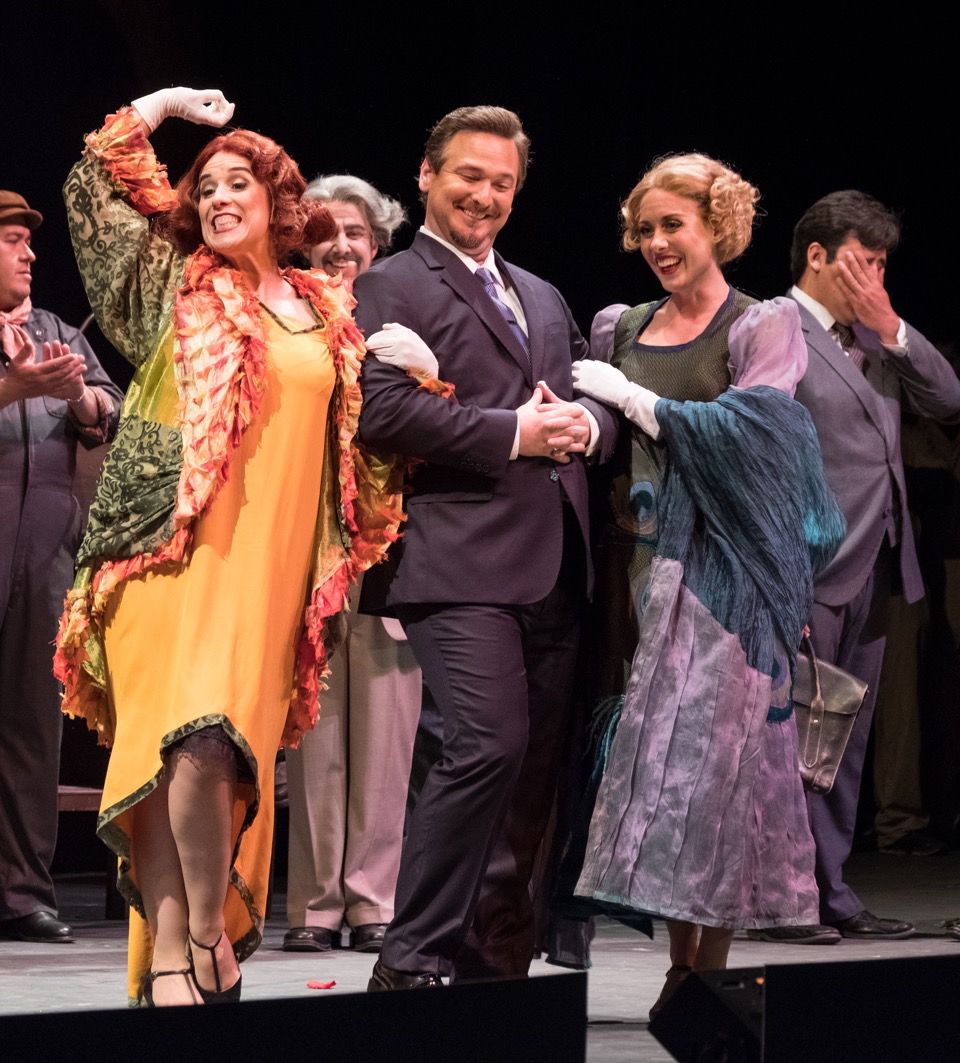 The stepsisters keep a tight hold on the man they think is the studio director. From left: Cherry Duke, John Boehr and Adelaide Boedecker.

The grand finale of ‘Cinderella’ performed by El Paso Opera.

Ramiro, disguised as a chauffeur, stands by as Dandini and the stepsisters cavort.

Cinderella and her prince dance the night away on the movie set.

The stepsisters keep a tight hold on the man they think is the studio director. From left: Cherry Duke, John Boehr and Adelaide Boedecker.

El Paso Opera’s production of “Cinderella” was the most fun, most lovable opera I’ve ever seen. I know that “lovable” is not a proper operatic term, but I maintain no pretensions of being a professional music critic. I just know what I like – and I really liked this show.

I saw “Cinderella” at the “Youth Night at the Opera” on March 21, and judging from the students’ rapt attention and sustained applause with a standing ovation at the end, a thousand high school and middle school kids liked it, too.

Attendance usually hovers around 500 for this annual tradition, but twice as many students came this year for the evening, sponsored by El Paso Electric. Justin Lucero, the opera’s director of community engagement, coordinated with dozens of schools.

I wish you could have seen this dressed-up crowd of happy students going to the opera. Talking with David Holloway, El Paso Opera artistic director, and Chelsea Lamego, executive director, after the show, they were thrilled with the students’ response.

The vast majority of our nation’s young people will never be exposed to a production like this – partly because opera companies are closing right and left. We are lucky here. I liked what John Boomer, senior vice president and general counsel of El Paso Electric, said when he accepted this year’s El Paso Opera Maestro Award for his company’s support at the recent “Evening with the Stars” dinner. He said that potential newcomers look closely at a city’s cultural offerings before deciding where to locate their families and their businesses. May we continue to have an opera company in El Paso.

After chatting with the guest singers and others at that dinner, I wrote the preview that appeared March 19. Rather than review the stars’ impressive biographies or the inventive plot again – you can read it online – let me jump right into “10 Things I Liked about This Opera.”

10. The choreography. I loved the swirling and twirling and all the movement taking place. I liked that choreographer Olga Jordan and stage director Garnett Bruce used the whole stage for the perfectly synchronized dancing and the lively interaction among characters.

9. The elaborate sets. I lost track of all the scene changes, but each set designed by R. Keith Brumley was colorful and clever. Whether we were backstage at the 1930s vaudeville house or in the busy Hollywood studio, there was a lot to look at. A small troop of stagehands wearing Palace Pictures coveralls transformed the stage at lightning speed.

8. The costumes. Both the sets and the costumes, by Mary Taylor, came from the original Garnett Bruce version of “La Cenerentola” in Kansas City. This opera’s wardrobe was full of surprises, from the showgirls’ peacock headdresses to the “movie stars” in costume at the studio canteen. In the finale, Cinderella looked like a true princess in her shimmering ball gown and tiara.

7. The activity. Never a dull moment! With a cast of 35 and all sorts of fun stage “bits,” there’s so much to watch. For instance, while the stepsisters compete for the man they thought was the studio director, a barroom scene from a western is being filmed behind them. A cowboy in chaps keeps walking through the swinging doors and hitting a guy with a chair, take after take, adding to the fun.

6. The adaptation. We were so lucky to have Garnett Bruce here as our stage director. The longtime opera director at Johns Hopkins’ Peabody Institute of Music, Garnett wrote the innovative script and adapted the characters for the 1930s. We still listen to the rich music of Rossini’s “Cenerentola” and read the original lyrics, but we can enjoy all the creative twists.

5. The orchestra. In the pit were members of the El Paso Symphony, including the principals of the strings, woodwinds and brass sections. The trimmed-down group balanced beautifully with the voices. Robert Tweten of the Santa Fe Opera was back as our masterful conductor. I loved the harpsichord solos that he managed to play while leading the musicians!

4. The comedic timing. Each character had his or her moments, but John Boehr as Dandini, the chauffeur disguised as movie director, and Kyle Albertson as vaudeville impresario Don Magnifico, Cinderella’s stepfather, kept me laughing. With their spot-on gestures and expressions, these two Texans are clearly at home with comedy. Their fine duet in Act II while they wheeled around on club chairs was a hoot.

3. The acting. Speaking of comedy, Cherry Duke as Tisbe and Adelaide Boedecker as Clorinda stole scene after scene with both their harmonies and their hi-jinks. Like so many in this cast, they excel at both singing and acting. Even if you didn’t read the English or Spanish translations above the stage, you can tell what is going on when the stepsisters sing. Be sure to catch their expressions even when the action is elsewhere – they are funny!

2. The plot leaders. Randall Bills as Ramiro, the movie star/director looking for that one leading lady to love, has an amazing tenor voice and the noble bearing of a prince. Watch for the joyous moment he turns from impatient director to love-struck suitor. He is beaming. He has sung all over the world and we can see why. Adrian Smith, the wise movie producer Alidoro who’s pulling the strings to find his next star with a heart of gold, sings with gusto and strength.

1. Cinderella. Stephanie Lauricella as Cinderella – called Angelina in Rossini’s work – is the most delightful character I’ve ever seen in an opera.

The under-appreciated stepsister is not a shrinking violet, but vivacious and playful, even when she’s pushing a broom. She can also be feisty, especially after her stepfather forbids her to go to the movie studio.

Yet when she shows up at Palace Pictures in her classic blue ensemble and veiled hat, she takes on a graceful new nobility.

With her velvety, lush voice, Stephanie rules the stage. Cinderella can’t help but smile radiantly at Ramiro, her true love, and her smile makes us smile.

If you’re reading this on Saturday afternoon, March 25, you have one last shot to catch “Cinderella” tonight. Enjoy!