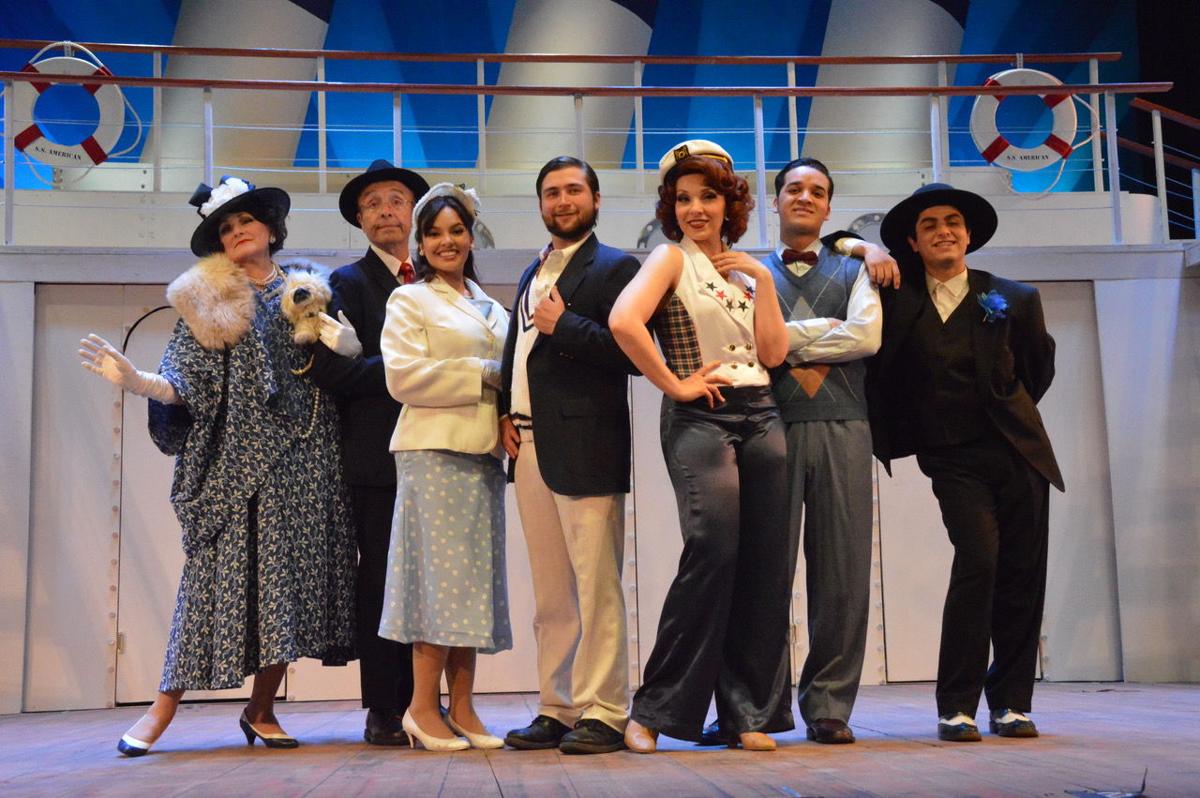 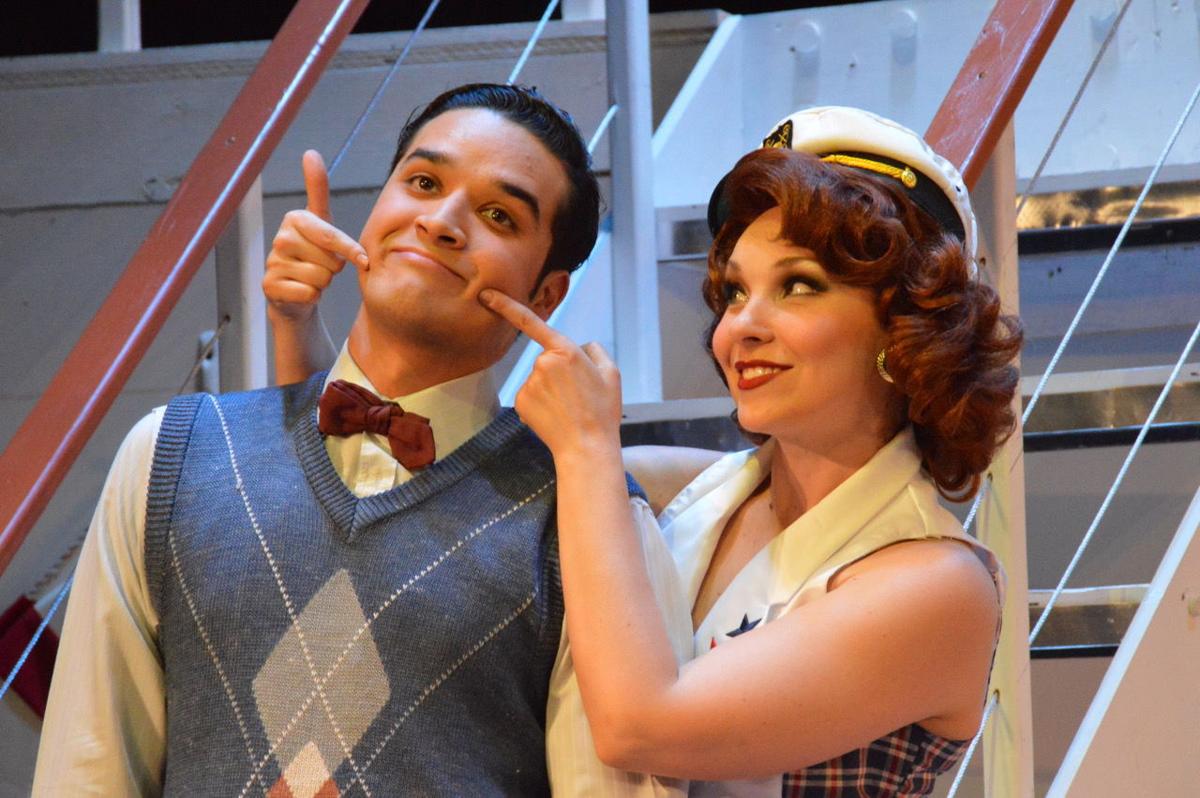 Everything goes right at UTEP Dinner Theatre’s revival of “Anything Goes,” which runs through Saturday, May 7. It’s a delightful ocean-liner ride to fun and frivolity, with toe-tapping familiar songs that will make you want to hum along.

You could be tempted to join in belting out “You’re the Top,” “It’s De-Lovely,” or “I Get a Kick Out of You” – but don’t. You won’t be able to sing like Josey Mitchell or Billy Crocker, and the folks at the next table won’t like it.

The singing, the dancing, the costumes, the set – everything about this production makes for an entertaining evening. From the opening bars of the overture to the finale, Cole Porter’s music is big and bright.

The theater, which was founded 34 years ago by Greg Taylor when he was a UTEP student, has presented “Anything Goes” a couple times before. And it has always been too popular not to bring back.

“Anything Goes” originally premiered on Broadway in 1937 and had very successful revivals in 1987 and 2011. Both of those Broadway productions won a boatload of Tony Awards and Drama Desk Awards, including the Tony Best Revival Award and Best Choreography. The 2011 production also earned an Astaire Award for Best Dancer on Broadway and the production’s album was nominated for a Grammy Award in 2012.

“It’s the quintessential musical of the 1930s,” says guest director Justin Lucero. “These songs are now American standards and part of our popular culture, even today.”

Cole Porter wrote the hit score for the era’s biggest singing star on Broadway, Ethel Merman, and the 1987 revival featured the famous Patti Lupone. “When it came time for casting this production,” Lucero says, “I went for the queen of El Paso’s musical theater, Josey Mitchell.”

As the witty and all-too-human lounge singer Reno Sweeney, Mitchell shines, just as she did in “Evita” and “Mary Poppins” and so many other leading roles at the dinner theater over more than a decade.

Mitchell, who is also the dinner theater’s go-to choreographer, is the dance director at Coronado High School and their 2016-17 Teacher of the Year. Last Monday, when I watched the dress rehearsal, I learned that she had received another honor just that day. She was named one of the Top 10 Teachers in the El Paso Independent School District.

Mitchell is especially thrilled about one of her co-stars, Beth Leffler, in her first UTEP Dinner Theatre performance. Leffler, who plays the mother of debutante Hope Harcourt, has been onstage at almost every theater in town, including many that have closed long ago.

A long-time educator and a member of the original 1978 “Viva El Paso!” cast, Leffler says that she “managed to stay retired from teaching theatre for almost five minutes, before joining the cast of ‘Anything Goes.’” Leffler is more than a role model and mentor for Mitchell; she’s also Mitchell’s mother.

I was intrigued and excited to hear that Lucero, director of community engagement at El Paso Opera, was selected as the guest director for this show. He started his own theater career with a role in UTEP Dinner Theatre’s 2005 production of “Beauty and the Beast” that starred Mitchell as “Belle.”

Lucero is quick to give all credit to the theatre’s founder and producer, Greg Taylor. Since then, Lucero has worked with top members of the theater community, studied in London and launched his own theatre company in Las Cruces. “Greg has given us all a chance to learn so much and to do what we get to do,” he says.

I cannot recall the last time the theater had a guest director. With the talent on the theater’s staff, including Taylor and Jaime Barba, there has rarely been a need. So Lucero, a freelance director, was thrilled when he got the call from Taylor.

“Anything Goes” has been one of Taylor’s favorites and is now one of Lucero’s. “Cole Porter is one of our country’s genius lyricists,” Lucero says. “He’s known for his jazz, but the words for these songs are so witty and clever.”

He adds that you have to remember that this was written as escapist entertainment during the Great Depression. “This show is trying to get a smile from the audience. It has a whimsical and cartoony vibe,” Lucero says. “It is not so much plot driven as an excuse for singing and dancing.”

As usual, the dinner theater constructed a truly creative scenery concept. You will like the ship backdrop with all the portholes and smokestacks. The real scene-stealers are the staterooms that slide in and out of the belly of the steamship. Lucero says they are on casters and quite heavy.

“It’s all hands on deck backstage when they need to be moved,” he says.

My favorite backdrop was the big golden moon and the star-speckled sky. The sets and costumes have a red, white and blue theme that evokes a big luxury liner experience of the time. As usual, Barba’s period costumes – from the 1930s in this case – add to the high production quality.

Suffice it to say the narrative does hark back to that classic comedy formula that was so loved by Shakespeare (born on this day, April 23, 1564). It’s full of mistaken identities, star-crossed lovers, archetypal fools and lots of chasing around.

It’s a cute story without a strong moral. Nevertheless, persons attempting to find happy music, lovely singing and crisp choreography in this madcap comedy will be richly rewarded.

Some performances sold out